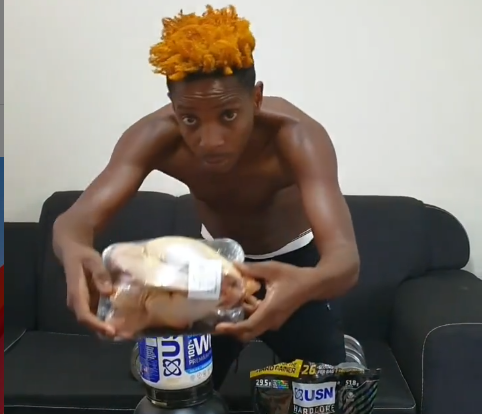 The comedian has, in recent years undergone an impressive transformation which has seen him gain some significant amount of body mass.

In truth, he is no longer the skinny comedian who used to crack ribs as far back as 2010.

Amid all the body gains, fans could not help but notice that Eric Omondi has slowly reverted to his old physique, especially over the last few months.

Well, he has a perfectly good explanation for that.

In an Instagram post shared recently, Omondi said his sudden weight loss was because of his reality show Wife Material.

“At the beginning of #WifeMaterialOne I weighed 78 Kgs and was extremely muscled up, by the end of #WifeMaterial2 I am 57Kgs with diminished muscles (Handling 23 Women is not a joke),” Omondi observed.

His ‘Wife Material’ TV show is as controversial as it is entertaining and it typically features ladies who do not mind going out of their character for TV.

Case in point is young socialite Shakila, who has been a regular in past editions of the reality show.

Despite losing weight once again, Eric Omondi says he is determined to regain his short-lived former glory and he is working towards a target.

“Now I have to get back and go all the way to 80 Kgs of pure, lean muscles before #WifeMaterial3 and maintain it forever… let’s go,” he added.

It will be interesting to see how that pans out as the comedian is preparing for another season of Wife Material – the same show he says is eating up at his gains.

Subscribe to watch latests videos
In this article:Celebrities,Kenyan Celebrities