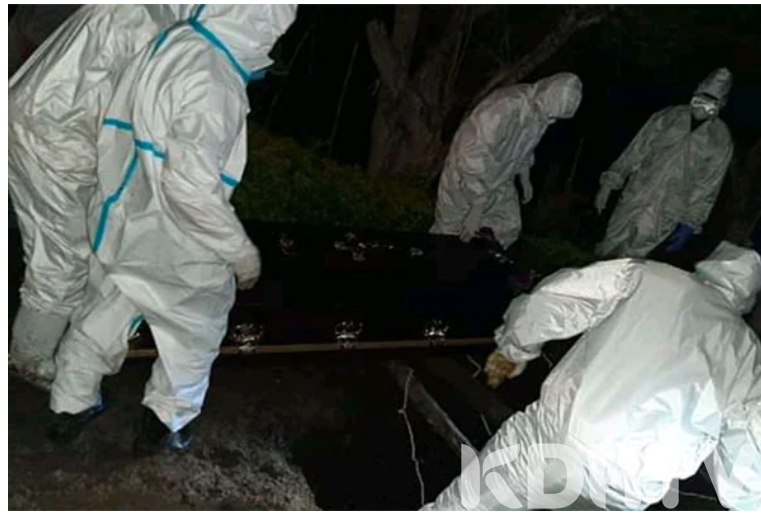 Reportedly, county public health officials presided over the burial of the the 55-year-old Erick Kosgei in accordance with the protocols set by the Ministry of Health.

In attendance were also relatives who had not come into contact with the deceased.

The burial event took place at around 7 pm Wednesday night and it lasted for a few minutes.

Mr. Kosgei had history of diabetes and had traveled from Nairobi while ill and died the following day

He was brought to Bomet county with a police vehicle and later admitted at Longisa Hospital the same.

The use of police vehicle raised concerns after a section of Kenyans suggest that they could have used an ambulance.

“A police vehicle was secured by a relative who is policeman to transport the man from Nairobi. He had been undergoing treatment in Nairobi on and off for some time before the transfer to Longisa Referral Hospital,” said a family member who did not want to be named.

Consequently, 10 doctors and nurses who made close contact with the deceased have since been taken to quarantine.

Read also: It’s a do or die as Tanga Tanga plan to take on President Uhuru Kenyatta head on

On the same note, the Bomet governor Hillary Barchok warned members of the public against withholding crucial information from doctors on the travel history

He disclosed that family members of the deceased lied to health workers at the Longisa hospital something that put many into a risk of contracting the virus.

“Sadly, family members of the patient lied to doctors at Longisa Hospital that he had not travelled out of Bomet…that he had been brought direct from his rural home for treatment,” he said.