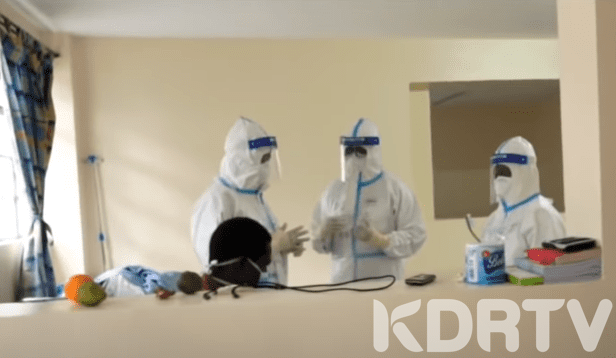 (KDRTV)-New record has been registered as Kenya confirmed that on Sunday April 17, 57 more people contracted coronavirus which is the highest number in a day since the first case was reported in the country.

According to a statement by the government spokesperson Cyrus Oguna, the 57 more cases were reported after 2198 samples were tested in the last 24 hours

So far, the total number of positive cases of coronavirus in the country is 887

The new cases were distributed as follows; Mombasa had 35 cases, Nairobi had 17, Kajiado 3 while Kwale and Kitui had one case each.

“Thirty-four of the positive cases are males, and 23 are females. The youngest of the cases is two years old while the oldest is 61 years. Cumulatively, we have so far tested 43,712 samples,” adds the statement.

In Mombasa Mvita had 22 cases, Likoni 4, Changamwe and Nyali had three cases each, while Kisauni had 2 cases with Jomvu having one case

On the other hand, in Nairobi, Kibra had 9 cases while a mandatory quarantine unit in Nairobi had two cases, and Eastleigh had two cases. Again, Aga Khan Hospital, Kamulu, Dandora and Pangani have one case each.

At the same time, 12 patients have been discharged from hospital bringing the total number of discoveries to 313 while the number fatalities remain at 50

Read also: Trump Promises That COVID-19 Vaccine Will Be Ready In 2020

The record broken today has raised eyebrows whether the schools will reopen in June as the government had hinted before.