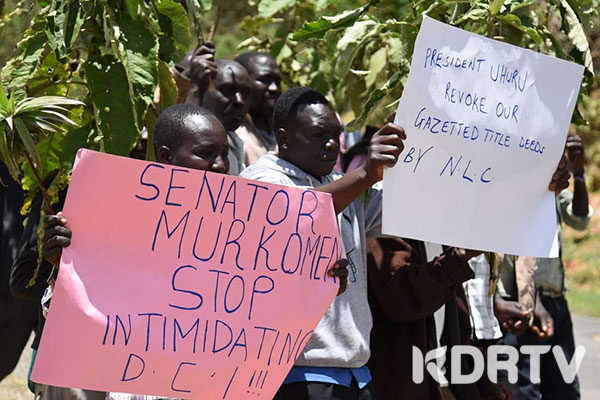 It’s very hot in the former Rift Valley Province as Locals who are directly affected by the stalled Kimwarer and Aror dams project due to the alleged Kshs. 21 Billion Shillings scandal which has roped in the Finance Cabinet Secretary Mr. Henry Rotich and his Permanent Secretary Kamau Thugge, refused to take part in an organized protest rally by Politicians from Rift Valley. The politicians  had called for protests in support of the Cabinet Secretary Mr.Rotich and the Managers of KVDA but were shocked when the protests turned to be a curse.

Residents instead heaped praises to the DCI Mr. George Kinoti  and the Director of Prosecutions Mr. Hajji who have expeditiously indicted the Cabinet secretary for Finance and and a battery of Procurement staff and by extension the Managers from Kerio Valley Development Authority and suppliers who are accused by the DCI to have hatched scheme to steal from Kenyan TaxPayers.

The residents told off the politicians and said that everyone should carry his own cross and yoke and stop dragging the community to their activities. The residents were shocked to learn that part of the looted money was meant to be a payment for their relocations whereby the money was paid but no one was compensated to give way for the dams to be constructed.

One Resident who was visibly agitated told off the politicians and called the schemers of the scandals thieves who belongs in jail because they’ve stolen from the poor residents who were to gain from the projects.

On the other hand  politicians allied to the Deputy President has called the arrests a ploy by President Uhuru as a planned embarrassment to his deputy which has now widened the rift in Jubilee party.

The Deputy President Dr. William Ruto has not commented or given any statement on the arrests of his perceived allies. The vocal Member of Parliament  for Kapsaret Mr. Oscar Sudi has termed the arrests weird and mere fabrication meant to tarnish the good name of the Cabinet Secretary who has diligently worked for President Uhuru Kenyatta for over 7 years but now the President is calling him a thief something Sudi calls the President a turncoat.