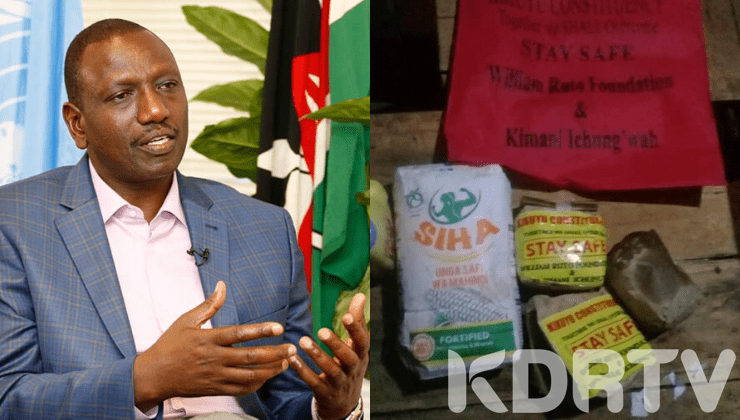 DP Ruto Distances Himself From Poisonous Food In Kikuyu

(KDRTV)-Deputy President William Ruto has refuted claims that he distributed poisonous relief  food which was branded his foundation`s name, in Kikuyu constituency in Kiambu county

However the secretary to the communication team of the Deputy president David Mugonyi denied the claims and instead referred to it as ‘political thuggery.’

Mr. Ruto further said that his foundation only distribute relief food through churches, mosques and with involvement of local leaders

“Reports from locals indicate that the strange food donations in question were hurriedly thrown from moving vehicles to unsuspecting public with fake branding, that is not from the Foundation,” read the statement.

“The William Ruto Foundation has been donating food in Nairobi and its environs for months now without any incident. It is clear those behind the distribution of the contaminated food are engaging in political thuggery for other reasons.”

At the same time, the Deputy President pointed fingers at those behind the distribution of the poisonous food as peopl who are playing with the health and lives of innocent Kenyans to achieve political gains

“We sympathize with those who have been affected and pray for their speedy and full recovery.  We shall follow up with the local leadership to assist them with medical care as is appropriate in consultation with Health officials,” added the statement.

“It is revolting, despicable, callous and cruel to play with the health and lives of innocent human beings to score political points. Human life and dignity are higher than any political agenda.”

“Those behind this incident are irresponsible, barbaric savages who have no place in civilized society,” added the Deputy President

KDRTV understands that of late, the rift between President Uhuru Kenyatta and his Deputy had widened after Ruto`s allies were ousted from various positions.

The Jubilee party management said that the crackdown and clean-up of the party to punish defiant is ongoing.