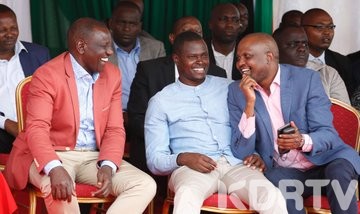 Deputy President William Ruto`s speech was cut short by a woman during a church service at PCEA Makongeni Church in Thika on Sunday, November 24.

In a viral video making rounds on social media, the woman was patient until the Deputy President took the dias to address the congregants who were calm by then.

Read also: WILLIAM RUTO: No Kenyan Should Be Forced To Support BBI

The woman moved speedily and calmly up to the podium, where the DP was standing and knelt before him pleading for help.

“My child did final exams while in a hospital ward and I totally have no money, I am from Ndindi Nyoro’s constituency but I stay in Kiambu, please help me,” cried out the woman as the DP helped her rise up.

Deputy President`s security details attempted to take the woman away from Ruto but he insisted that the woman sits in front close to him.
Ruto told them to make the woman take the front seat and promised to solve the woman`s problems.

“Don’t take her to the back, let her stay next to me. The woman has made a lot of effort to brave her way here. We will solve her problems immediately,” urged DP Ruto.

During the incident, the congregation was silent but they started clapping when the DP Ruto promised to solve the woman`s problem.
It is the records that this was not the first time a civilian was approaching the Deputy President.
Subscribe to watch latests videos
In this article: