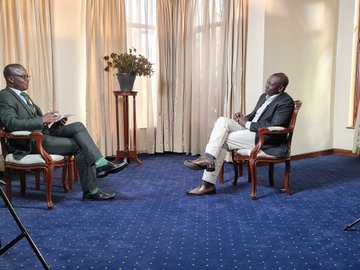 (KDRTV) – Deputy President William Ruto has said he does not believe 2007 elections were rigged. In an interview with Citizen TV’s Joe Ageyo, the DP said that despite being a Member of the ODM Party which contested the election results that declared President Mwai Kibaki the winner, they (ODM) did not verify claims.

“We didn’t get to a point where we tested what we were saying against what was announced. If we had gone to an election petition as NASA did in 2017, we would have proved the elections were rigged,” the DP said.

He, however, blamed the Electoral Commission of Kenya (ECK) Samuel Kivuitu who said that he did not the source of the election results he was announcing.

RUTO declares he is a democrat. Adds President Kibaki squarely won 2007 elections. This is ok but I believe it made @KofiAnnan turn severally in his grave: else why was @WilliamsRuto a member of the National Dialogue& Reconciliation Team on behalf of @TheODMparty . #RutoSpeaksOut

“Kivuitu was running the elections but he was telling us that he has no clue where the Returning Officers were and that he was not sure of the numbers he was announcing. What do you do in such situations?” the DP said.

According to Ruto, you cannot rig elections in Kenya and get away with it. It is very hard to do that.

Read Also: Ruto to Ditch Jubilee and Join this Party

“From where I sit, it is not easy to rig an election and get away with it. Any election that is rigged, people go to court and they overturn them. The best way to know whether an election was rigged is to subject it to due process,” he said.

Ruto’s claims on the 2007 elections are bound to reopen old wounds especially since he was at the forefront of ODM members demonizing their URP counterparts for rigging elections. The DP spent most of his time at the Bomas of Kenya, putting pressure on Kivuitu.

ODM won elections in 6 out of the 8 constituencies but President Moi was named the winner and sworn in at night.

Chaos erupted in Rift Valley and other parts of the country leading to hundreds of deaths and thousands of others displaced.

Ruto and President Uhuru Kenyatta were sued at the International Criminal Court (ICC) for crimes against humanity.