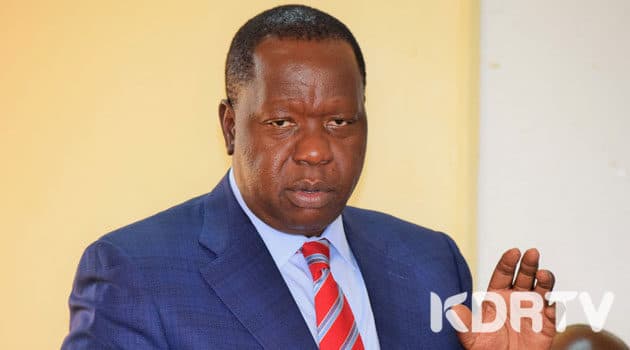 (KDRTV)-The Ministry of Interior on Friday, July 24, urged members of the public to discredit reports that Interior CS Fred Matiang`i had been admitted to the Intensive Care Unit at the Aga Khan Hospital.

“To all members of the public, please disregard the fake news and misinformation being spread on various outlets that CS Dr. Fred Matiangi is hospitalized. The claims are completely untrue,” read the statement.

KDRTV understands that reports about CS Matiang`i being admitted to ICU have been flowing on social media since Thursday evening and Friday morning; intimating that the CS was admitted after contracting the novel coronavirus

“Matiang’i was admitted at the facility after his condition deteriorated at his home where he was under self-isolation,” read an excerpt seen by KDRTV

“We can confirm that two Cabinet Secretaries and a senior government official have tested positive. However, the trio are asymptomatic, we have advised that they be kept on home-based care as we monitor them,” the report inidcated.

Meanwhile, KDRTV is aware that president Uhuru Kenyatta wrote a letter on July 21, blocking all cabinet secretaries from traveling outside Nairobi following the surge in coronavirus infections

“You are advised not to move out of Nairobi for the next one week until advised otherwise. This directive takes effect from the date of this communication,” read the memo