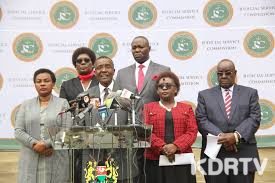 In a statement on Tuesday, the Chief Justice David Maraga said following a vacancy announcement on February 22, 229 applications were received for the Environment court positions and 160 for the Labour court.

Interviews were conducted between July 9 and August 8 with only 63 and 29 applicants were shortlisted for the Environment and Labour court positions respectively.

The Labour court is also of the same status as the High Court.