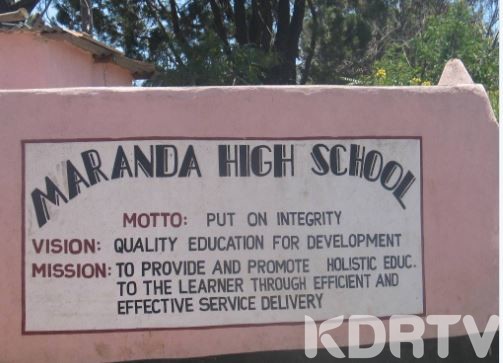 Maranda School has once again cemented its place as one of the best schools in Kenya after 618 candidates scored a mean grade of c+ and above, which is the minimum university entry grade.


Maranda Principal Edwin Nemachanja said the huge number of candidates had an effect on their mean score which was an impressive 8.9.

“We had a record 705 candidates. It is very difficult to get to the top because of the large number of candidates,” said Mr Namachanga.

“We expected to be among the best. Last year, we had a candidate in the Top Ten best performers. We will give a comprehensive analysis after getting all the results,”  he added.

In the results released on Wednesday, Education CS George Magoha recognized one of Maranda’s candidates Kore Ruto, who was ranked as the best candidates in the underage category. Magoha even joked that he didn’t expect someone so young to survive at Maranda.

Maranda School has qualified 618 students from the 2019 KCSE to join Universities.

Even though the number of As is 19 (still commendable), Maranda remains one of the most society wide impactful schools.

Despite the impressive results, the schools is struggling with poor infrastructure. The school has more than 3000 candidates but they are using a dining hall build in 1945.

Proud Alumnus ! People can't get it. Since 2011 (My year), the school candidates registration has been going up! Maybe that is why you will not see Maranda in top 10 for the next few years. https://t.co/aiujLlpWCD

Maranda has a huge infrastructure problem.

Together with @OAmollo and the Alumni, we will requesting @GeorgeAOMagoha and the Ministry and Kenyans to help build a multipurpose hall.