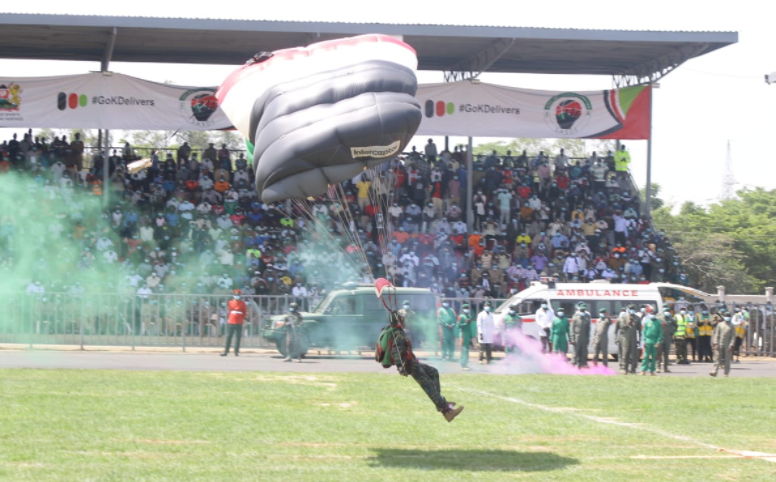 A Military parachutist injured himself after an awkward landing during the Madaraka day celebrations on Tuesday, June 1.

The Kenya Defence Forces Paratrooper was among those showcasing their skills before President Uhuru Kenyatta who was in attendance at the Jomo Kenyatta International Stadium.

Burundian Head of State Évariste Ndayishimiye, Deputy President William Ruto and former prime minister Raila Odinga were among the over 3000 guests who witnessed the accident at the venue.

Paratrooper injured while landing at the Jomo Kenyatta International Stadium in Kisumu for the 58th Madaraka Day celebrations #MadarakaDay2021 pic.twitter.com/IBMd9HpZLo

Photos from the scene shows the paratrooper crash landing and was unable to get up by himself as he called for help from his colleagues.

Medics soon rushed to the scene to help the injured comrade in tow with an ambulance on standby to rush him to hospital.

KDF paratroopers are popularly known as Green Eagles or ‘Death from above’ and were officially tasked with being part of Madaraka Day celebrations in Kisumu.

The special forces are military teams with unique training to handle high-risk tasks such as counter-terrorism operations.

Madaraka day celebrations were not short of drama as the paratrooper’s accident happened on the same day a Kenya Navy officer fainted at the same venue.

The officer, according to reports, developed health complications which caused him to briefly lose consciousness.