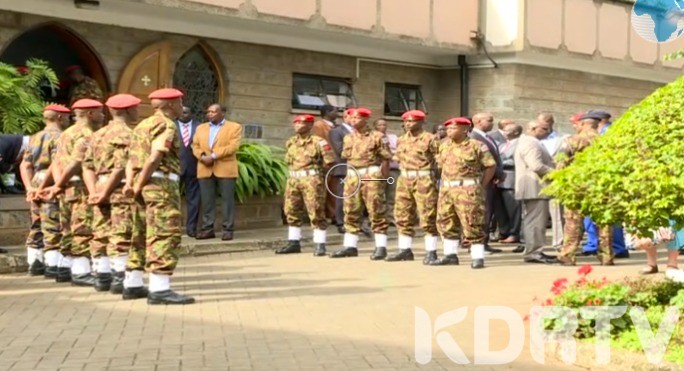 (KDRTV) – All roads leading to the Lee Funeral Home have been closed, as the Kenya Defence Forces (KDF) has taken over the facility following the death of former President Daniel Moi.

Mzee Moi’s body was taken to the facility a few minutes after 8 AM. This was after he passed away in the wee hours of Tuesday morning. Only Moi’s family members were allowed to access the facility.

Roads leading to Nairobi Hospital & Lee Funeral Home have been closed
Military & GSU have taken over
Only close family members allowed to access the area pic.twitter.com/iWYN4eUvDd

Chief of Defence Forces Samson Mwathathe and his deputy are some of the notable state officials who are present at Lee.

Pallbearers from the Kenya Military Police are also at the facility and are expected to take charge of the preparation of the body.

Earlier on, Moi’s son, Gideon Moi announced that the family had accepted the fact that Mzee was gone.

“…we have accepted. But mine is just to give my heartfelt gratitude to Kenyans.. thank you and may God bless you…” he said.

President Uhuru Kenyatta announced that Moi would be accorded a state funeral, and this could explain the presence of heavy security at Lee. The public was also not allowed to access The Nairobi Hospital.

My Statement on the Passing away of President Daniel arap Moi: https://t.co/ky4DK03lrY