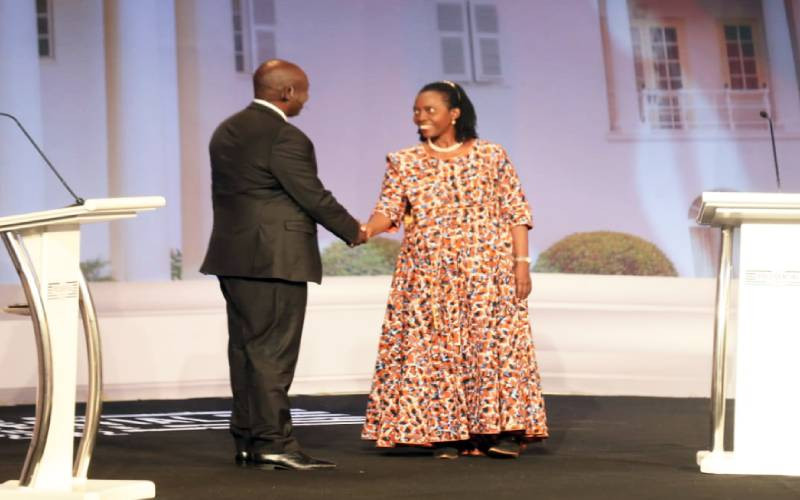 The recent debate that was held on the 19th of July sparked mixed reactions and for some days, Kenyans could not stop talking about it. However, the Media Council of Kenya (MCK) has urged Kenyans to be keen on polls conducted on social media after presidential debates.

“While online consumption of media content is increasingly becoming critical, we are cautioning Kenyans to beware of manipulation deliberately pushed by purveyors affiliated to the various political competitors. We noticed a spike in the number of bots participating in online conversations around the debate,” Omwoyo stated.

Media, on the other hand, were advised not to carry out opinions before or during the presidential debate set to be held next week which Ruto will be facing off Raila. Unknown to many, the use of bots during the Gachagua – Karua debate was flagged by research company Infortrak after it was forced to pull down a poll it had put up on Twitter.

Speaking exclusively to one of the local media houses on July 20, Infotrak’s CEO, Angela Ambitho, explained that they noticed unusual engagement of bots in the opinion polls.

“When we did this Twitter poll we realized there were bots and we decided to pull it do. A Twitter poll is not scientific but it can give a gauge of what Twitter users think,” Ambitho explained then.

The report by MCK further indicated that 34 million Kenyans watched the running mates debate even as Citizen TV dominated the viewership.

“Three-quarters of the viewers or 76 per cent watched the event on television, 19 per cent followed on radio while 10 per cent totaling 3.4 million were on social media.

“In terms of TV viewership, the findings further indicate that 67 per cent watched the debate on Citizen TV followed by Inooro TV and NTV at 8 per cent each, while KTN and KBC came third at 7 per cent each,” MCK stated.

Subscribe to watch latests videos
In this article:karua, Kdrtv, rigathi