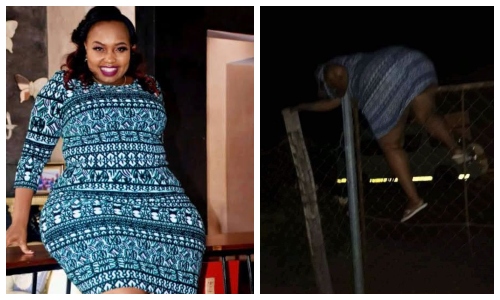 Nominated Senator Millicent Omanga has come out to vehemently deny that a viral picture of a woman jumping over a fence at night is her.

Police have also released a statement dismissing the photo that has been doing rounds on social media claiming the politician was running for her life in Kasarani Police Station after dogs were unleashed on her.

Rumours suggested that Omanga was causing a disturbance at the police station forcing them to unleash the dogs to disperse the building crowd.

On social media, Omanga said that the photo was just propaganda from her enemies.

“Disregard the propaganda about me jumping over Kasarani police station fence. It is an idle rumour worth no one’s attention,” she said.

“Sincerely, how can I jump, over anything, let alone a high fence, without Kenya experiencing earth tremor?”

Disregard the propaganda about me jumping over Kasarani police station fence. It is an idle rumour worth no one's attention. Sincerely, how can I jump, over anything, let alone a high fence, without Kenya experiencing earth tremor?

According to OCPD of Kasarani Peter Mwanzo, Omanga wasn’t detained at Kasarani on Wednesday night.

“I suspect the allegations are founded on a political rivalry that has, of late, gone online,” said Mwanzo.

“Neither the senator nor her relative was booked as a detainee or visitor at the police station,” he added.

Mwanzo said Kasarani Police Station’s fence does not look like the one captured in the viral image.

“It would be miraculous for someone to jump over the barbed Kasarani [police station] wire fencing without sustaining physical injuries,” he said.

Mwanzo said that there’s no other explanation on why the rumour was started other than that the person wanted to soil the senator’s name.

“The person who started the rumour that we unleashed dogs on the senator is bent on tarnishing police officers’ reputation. We are professionally trained and are skilled at handling all manner of people accused of law infringement. Furthermore, we do not keep dogs at the station. The animals are kept at the [Kasarani] stadium,” said Mwanzo.

“That is cheap politics. During the day, the authors of that narrative were claiming that the woman in the picture was a female governor. How the narrative changed as the day progressed puzzles me, ” added Omanga.