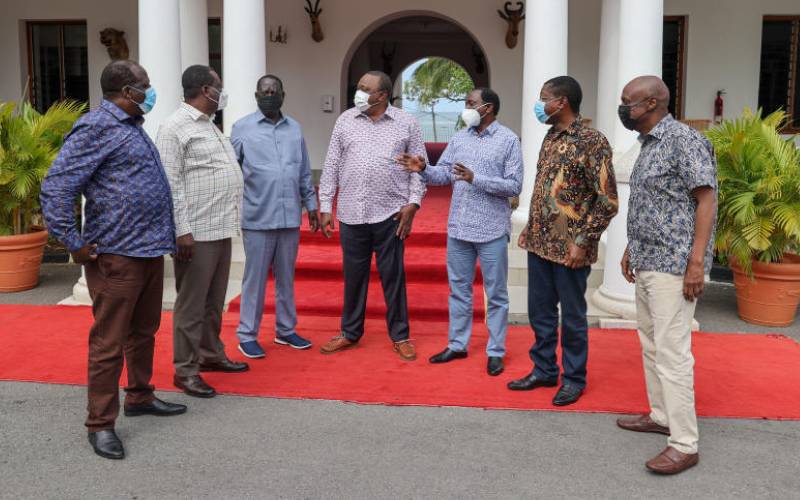 KDRTV NEWS: President Uhuru Kenyatta and the One Kenya Alliance (OKA) principals have not agreed on the plot to disband OKA and support Raila Odinga`s 2022 political ambitions.

During a meeting led by President Uhuru Kenyatta in State House in Mombasa, he requested the OKA principals to disband the alliance by merging it with the ODM party.

However, the principals agreed to look into the President`s request after the determination of the BBI plight.

A section of Kenyans has thus hinted that the OKA principals have agreed to work with the ODM outfit, however, they are just waiting for the right time to make the declaration.

The court of appeal is expected to make a ruling on the Building Bridges Initiative (BBI) on Friday, August.

During the meeting, reports indicate that OKA chiefs raised concerns on how power would be shared if the alliance merge with the ODM party.

The principals thus agreed to hold a meeting immediately after the BBI case ruling on Friday to smoothen their differences.

Analysis indicates that there are higher chances that the leaders will reach a consensus and would agree to disband the alliance and throw weight behind the ODM party.

Thus the OKA alliance is considered not to have a strong presidential candidate considering the popularity of all its principals; they cannot match that of the DP and Raila Odinga.

KANU that has been a member of the ruling party till this far has to express its hope that OKA principals will support the ODM leader.

“There is hope for unity. We have been saying all along that you cannot ignore Raila and neither can you ignore his former Nasa allies or Jubilee coalition which also consists of KANU,” KANU Secretary-General, Nick Salat, stated.

President Uhuru Kenyatta had been quoted saying that he would support one of the NASA principals before the alliance was disbanded.

If the OKA principals agrees on the merger, then this would a great move by Raila Odinga to head to the state house.