Karachuonyo North Ward voters in Homa Bay County have sworn to teach their elected Member of County Assembly (MCA), Hon. Paul Ongoro Wamunga a lesson after they accused him of unsatisfactory service delivery.

For the past two months, Paul Wamunga has been paddling in a bowl of hot soup after a slice of voters sued him of underperformance.

The MCA has been on a receiving end from the natives who have excerpted that the politician has not been able to affect the construction and restoration of popular feeder roads in his ward.

Speaking with the residence at Pala and Ouru markets, KDRTV.co.ke journalist, Mijoge Mijoge authoritatively reported that the residence is accusing Wamunga of declining to catalyze the construction and renovation of PALA-UHURU feeder road.

They have also accused him of not liaising with a neighboring Kibiri ward MCA to effectively construct OURU-KANDIEGE feeder road.

Consequently, the MCA has severally received a dismissal from voters who even hails from his strongholds. This was evidenced when the MCA was badgered after what the voters termed `feeble` contribution towards the funeral arrangements following the deaths of social youth’s icon, Garry Felix and former nominated MCA Racheal Opolo. 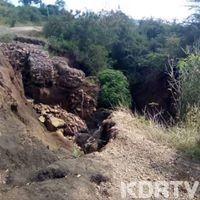 An in-depth evaluation of the MCA reception in the two funerals is evidence that the MCA has even been rebuffed by not only the residents but also fellow politicians.

Speaking with KDRTV, a resident said that when Hon. Wamunga is approached for assistance, he would unveil a list of people who have been visiting him for help.

Paul Ongoro Wamunga was elected as an MCA on ODM party ticket replacing Ouma Odongo who reigned for one term after he was accused of corruption.

A research done by KDRTV is placing more hopes that former MCA Hon. Ouma Odongo and George Obondo Deya would win the sit if they contest come 2022.

McDonald Mariga Struggles During an Interview with a Journalist