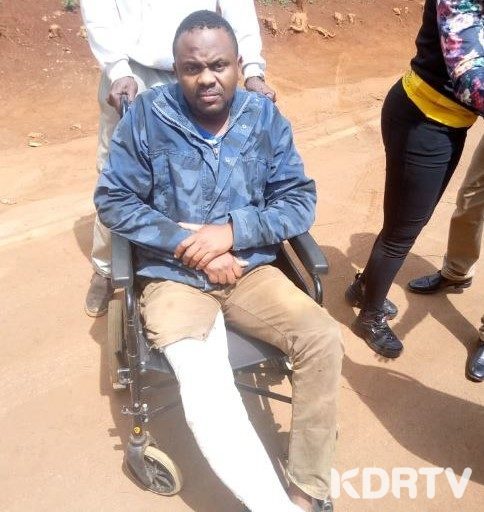 Samuel Ndung’u a police constable at Chuka Police Station has accused his boss of assault that led to his leg being fractured.

According to Ndung’u, he had visited his boss to explain certain incidences before the boss lost his composure and pushed him down the stairs, leading to a fractured leg.

“I went to the boss’s office to explain the reasons why I did not go to patrol with the dog that night. The dog was unwell hence could not have managed the night duty. Before I could finish my explanation, he was already pushing me out of the door and down the stairs that led to me fracturing my led,” said Ndung’u.

The constable ideally clarified the air that there existed no bad blood between the two and had previously worked unanimously and even cracked jokes on several occasions.

After the incident, the members of the public who had witnessed rushed him to the hospital and upon further examinations he was requested to undergo an operation to fix the broken knee cap.

Speaking while in Tenri hospital awaiting specialized treatment, the constable said that his boss had not called nor inquired about his health.

He said that he was very disappointed having worked under him for four years and without any prior problems.

The Tharaka Nithi County Commander Charles Mbatu denied any reports linking to the incident although he promised to make a follow up and investigate the actions behind it.

Ideally, after much pressure, the suspected senior officer accepted to communicate to the journalists regarding the incident where he denied the accusations adding that he would never be engaged in assaulting a colleague.

He also asked the Suspect to clearly come out and clear his name since he was not the person responsible for his fractured leg.

With all these going on, the suspect is hopeful that justice will be served and the senior Boss punished.

However, he is also doubtful since he has powers to control the directions investigations will take and can easily decide to dead the case.