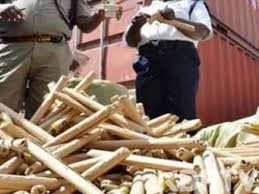 A Police officer was on Thursday arrested in possession of illicit drugs in Voi, Taita Taveta County.

The officer identified as Aden Tachi Halake was found carrying nine stones and 50 rolls of narcotic substance known as Shisha.

A police report seen by KDRTV revealed that the officer is a prison warder who is attached to Manyani Prisons.

“Officers acting on intelligence at Total Petrol Station along Nairobi- Mombasa Highway arrested the officer who is a Borana male adult aged 28 years and a prison officer attached to Manyani Prison. He has been placed in custody to be charged with the offence of being in possession of narcotic drugs,” the police report revealed.

This comes at a time when Prisons boss Mr Wycliff Ogalo opened up saying that the department was full of rogue police officers.

Last week, two police officers were nabbed by their colleagues after they were found ferrying foreigners inside a police vehicle in a suspected case of human trafficking.