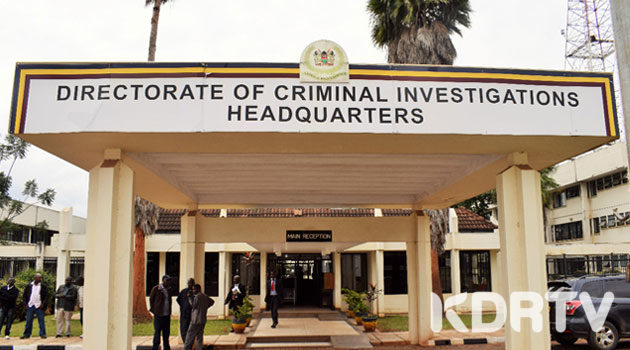 Two prison warders have found themselves in hot soup after the Director of Criminal Investigations (DCI) orchestrated their arrest on the offences of hiding cocaine in the prison toilets.

According to a CCTV footage obtained by the DCI, the two identified as Constables William Chengo and Boniface Korir were caught hiding contraband in Manyani maximum prison in Voi.

They were also in possession of ammunition that was unauthorized hence considered an illegal practice.

The reasons for their involvement in drugs around the prison facilities have not yet been established, although the DCI officers believed it was meant to be smuggled to the prisoners.

Through the official DCI twitter account, the arrests of the two were communicated with promises of intense investigations into the matter.

“Two officers have been captured in CCTV footage in a Manyani Maximum Prison hiding cocaine in the prison toilets. This is unethical and a serious investigation team is currently working on the matter,” read the tweet.

Prison warders have been on the receiving end after a report indicated their unethical behaviors at work as well as inhumane tortures that they expose the prisoners to.

This arrest comes just a day after 133 senior prison officers were reshuffled in a plot to clear the rot in prison departments.

Unethical warders have been identified in previous incidences to aid inmates in trafficking drugs in and out of prison and transporting contraband illegal goods at a fee.

For instance, phones and weapons are not allowed in prisons although some inmates are in possession of, and use to extract money from people.

Last year, an incident of inmates going on hunger strike to protest brutality and mistreatment from the warders shed light on the situations in most prisons in the country.

Apparently, it was alleged that in one of the Nairobi Prisons the warders would subject the prisoners into hard treatment and punish them severely if they failed to oblige.

To back up these allegations of brutality and harassment, there have been inmates who were in very good conditions that died mysteriously in prisons after getting summoned by the warders.

Therefore, this is just one of the incidents that took place, although more goes unnoticed or is simply are swept under the rag.

The prison departments are rotten to the core, and the new reshuffling of the police officials will help play a big role in unearthening the crook warders who play foul and exhibit unethical behaviors.