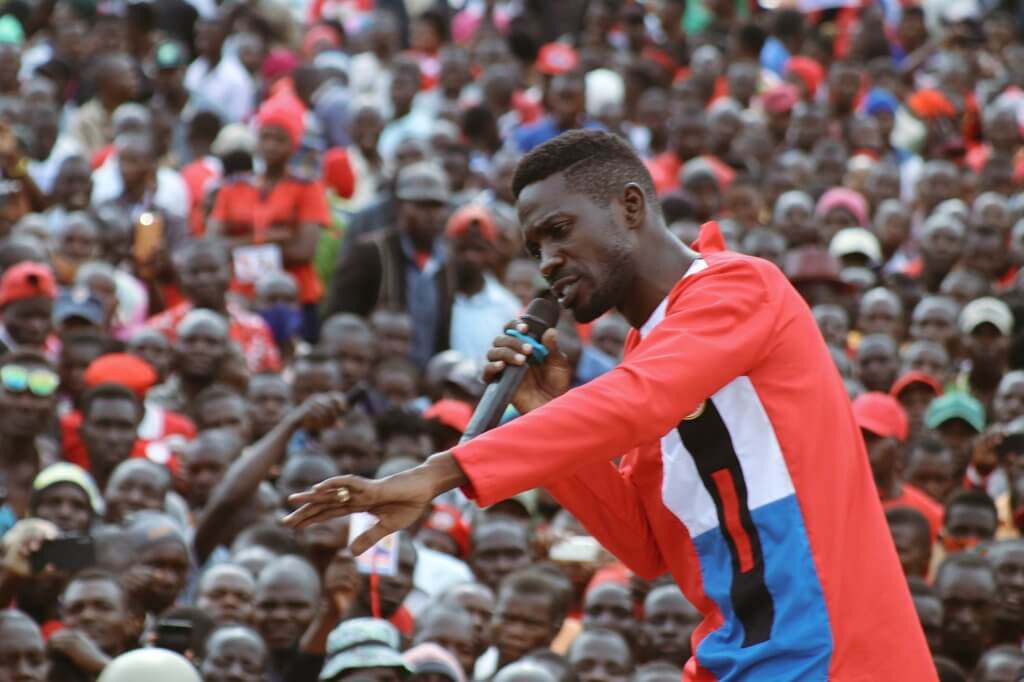 Unconfirmed reports on social media claimed that police officers blocked all roads to the venue.

The officers are also believed to have lobbed teargas cannisters into people’s houses at the border town.

As Bobi Wine is addressing people of BUSIA, police led by Afande Abraham Asiimwe at the venue are seen firing teargas in people’s houses exchanging words with journalists and the road is completely blocked.
A woman has fainted due to too much teargas😥and officers just look on.

The popstar musician, turned politician, has been on the receiving end of police brutality as he aims to unseat President Yoweri Museveni in next year’s elections.

His supporters have had to improvise means to get to his rallies as Police reign terror on the Kyadondo East Lawmaker.

Several pictures have gone viral on social media showing Kyagulanyi’s supporters swimming across a river to attend a political rally after roads were blocked by police.

.@NUP_Ug supporters swim through a swamp in Mayuge after security operatives blocked the road in attempt to stop them from joining @HEBobiwine’s procession
📸 @abubakerlubowa #MonitorUpdates#UGDecides2021 pic.twitter.com/H9V2ATmg14

On Tuesday, local media outlets shared pictures of a police vehicle stuck in Tororo due to poor roads.

Police patrol car got stuck due to bad roads surprisingly Bobi Wine asked NUP supporters to join him & help police to push the car which they did.
This was after the 2nd rally at TORORO and police had started firing teargas.
Bobi Wine has got a generous heart👊

Bobi Wine is alleged to have rallied his supporters to push the vehicle out of the mud.

Read Also: Bobi Wine Arrested Hours after Being Cleared to Run for President

Despite facing animosity from the police, Bobi Wine has promised to improve the welfare of the men in uniform if elected president.

Part of his police reforms, include increasing their salaries and allowances.