Kenya third president Mwai Kibaki was laid to rest today in his Othaya home, Nyeri county. However,  President Uhuru Kenyatta led the nation in Kibaki’s a state burial in Othaya.

Deputy President William Ruto was also in attendance. Ruto called for a peaceful election to avoid a handshake. According to Ruto, this was a way to honour former president late Mwai Kibaki who was buried today. 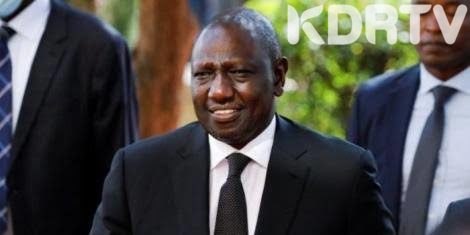 During his speech in Othaya Stadium, Ruto said that Kibaki was the father of modern Kenya. He further added that Kenyans can only honour him through a peaceful and decisive elections that will not call for a handshake.

“As Kenyans, the only way we can honour Kibaki is through peaceful and decisive elections that will not require us to have chaos and eventually seek a handshake. This will ensure he rests in peace,” Ruto told mourners at the burial of Kenya’s third president.

Ruto on the other hand praised Kibaki for his work in infrastructure and Kenyan development in general.

“Kibaki can be best described as the father of modern Kenya because he has done a lot for this nation,” said Ruto.

On the other hand, several dignitaries, including government officials, also arrived at the venue.