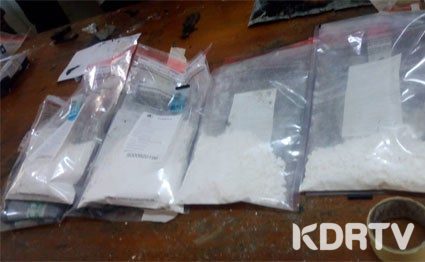 3 kilograms of cocaine were seized in Kisauni Mombasa County where two men suspected to be traffickers were arrested.

According to the residents, they suspected foul play and criminal activities going on in a private area around Barisheba and decided to alert the police.

They monitored the activities of the traffickers and after some time, tipped off the police on their whereabouts.

The officers then stomped the area, caught up with the drugs and arrested two suspects, Mujib Suleiman and Saady Bashur aged 47 and 59 respectively.

Drug trafficking has been a threat to the economy and livelihood of Kenyans over the years, with families loosing their loved ones through deals gone sour or jail term.

Cases of drugs being peddled illegally in and out of the country has been on the rise, with Mombasa County being the central point.

To make matters worse, foreigners have been using the aid of Kenyans and those in authority to get a through pass with the said drugs.

This is just one among the many that was lucky to be discovered early enough.

According to police officers and detectives, the drugs had been traced from Juba, Kampala before finally arriving in Mombasa.

They were in a suitcase hence difficult to gauge the exact contents in it.

The Director of Criminal Investigation through a tweet on their official handle affirmed the tracing of the drugs with relief that the perpetrators had finally been caught up with.

“Following intelligence, detectives recovered a suitcase from a residential area with clothes that upon further search, unleashed white substances that tested positive for cocaine.”

Ideally, some documents were seized during the process of arrest suspected to belong to some of the traffickers in different destinations in the world.

Although only the two suspects were arrested, the detectives believe there is a wider group consisting of drug cartels that are responsible for peddling drugs in and out of the country, with promises of more crackdown.