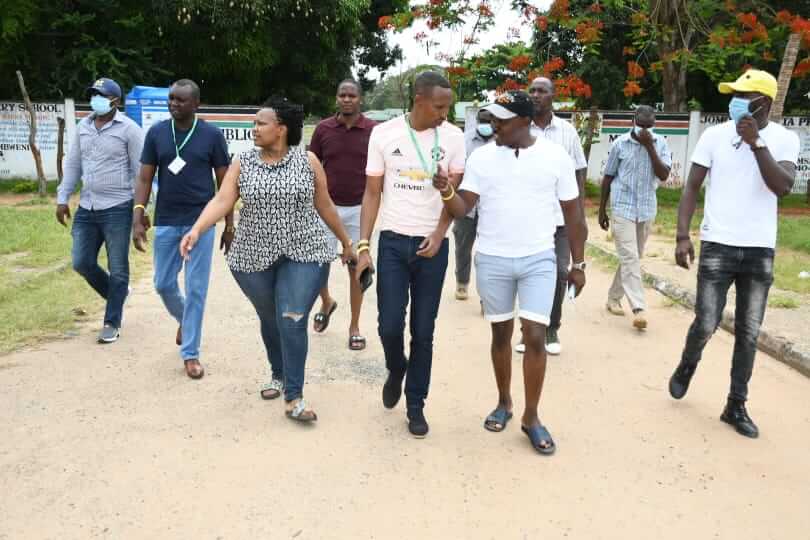 In a press briefing on Tuesday morning, the lawmakers led by Oscar Sudi (Kapseret) and Mohammed Ali (Nyali) said they have been denied from accessing polling stations. They questioned why Joho and his goons from Mombasa were allowed to enter polling stations and bribe voters.

Governor Joho in the company of recalcitrant ODM goons and state agents intimidating our agents and voters. See how panicked they are. By the way, they will not rig this election as long as we are here. Take this to the bank. #MsambweniDecides

Independent candidate Feisal Bader’s chief agent Khatib Mwashetani has allegedly been arrested. The lawmakers claim this was to ensure he is not present when the votes are counted in the evening.

They also claimed that 56 of their poll agents were arrested on Monday night to block them from accessing polling stations today. Some of the polling stations do not have Feisal Bader agents.

The PS Interior and Cordination National Gov’t. Tell the country why you have made an emergency transfer of OCPD Bitok of Msambweni and his police officers. Are you planing to mess up with Electoral security for by-election tomorrow @NationBreaking @IG_NPS

According to the Tanga Tanga members, police are being used to not only intimidate voters but also plan how to rig elections.

The Coast Region Police Commander is allegedly holding a meeting with police officers at the Msambweni Police station to discuss how they will rig the elections. According to Oscar Sudi, they have received information from some of the police officers, that ballots from two polling stations will be delayed.

They also questioned the transfer of Msambweni OCPD Zachariah Bitok on the eve of the elections.

Despite these frustrations, the Tanga Tanga politicians are adamant that their candidate Feisal Mohammed will win the elections by a landslide.

Feisal is facing a tough challenge from ODM candidate Omar Boga in the race to succeed former MP Suleiman Dori who died in March.