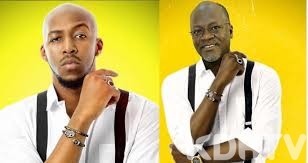 Idris, being a comedian decided to entertain his fans by switching roles with the President, where he pictured the president as a civilian while placing himself as the president.

He was thereafter summoned and ordered to present himself to the nearest police station for accusations of stepping beyond his boundaries by the Dar es Salaam Regional Commissioner Paul Makonda.

Which translates to,” I can see you do not know your boundaries. Present yourself to the nearest police station.”

According to the lawyer representing the comedian Eliya Rioba, he has been held at  police station in the main city, Dar es Salaam.

Ideally, sources from close relatives indicated that he reported to the police station on Wednesday and has not returned since.

The unraveling of the events detailed President Magufuli’s birthday where Idris suggested to have him relieved off work and and switch roles as he celebrated his birthday without the need to govern the country.

Magufuli was celebrating his 60th birthday on Tuesday October 29.

Some social media fans came to his defense with others criticizing the law adding that a comedian should be allowed to express himself in any way as long as it is part of entertainment.

Ideally, some civil rights movements have come to his aid terming the law as infringing on people’s space.