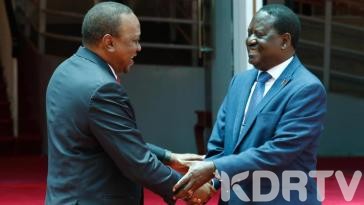 (KDRTV) – President Uhuru Kenyatta thought he was getting Barcelona star Lionel Messi when he entered the handshake with ODM leader Raila Odinga in March 2018.

However, according to City Lawyer Ahmednassir Abdulahi, Raila has underwhelmed during his time in government and his impact can only be compared to that of Arsenal’s Ivorian striker Nicolas Pepe.

Ahmednassir, who cleverly used the European football anecdote to analyse the current political situation in Kenya, says Raila’s first real task was to deliver the Third Revenue Formula in the Senate.

He says Raila has been unable to beat a team of four young Senators, who were signed free of charge, in the battle for the revenue formula. The four are Kipchumba Murkomen, Johnson Sakaja, Ledama Ole Kina and Mutula Kilonzo Jnr who have been calling for a win-win formula.

“Murkomen an attacking Midfield player, Mutula Jr who plays as a false Number 10, and a solid defensive Midfield of Ledama Olekina and Sakaja broke down every attach marshalled by UHURU’s team,” Ahmednassir says in his analysis.

5..Some hard lessons. Murkomen an attacking Midfield player, Mutula Jr who plays as a false Number 10, and a solid defensive Midfield of Ledama Olekina and Sakaja broke down every attach Marshalled by UHURU's team. Uhuru also bought a number of squard players most on free tranfer

The renown lawyer further accuses President Uhuru Kenyatta of signing average players who are either out of shape or below par. These players are Gideon Moi, Samuel Poghisio and Kalonzo Musyoka.

“Uhuru also bought a number of squad players most on free transfer either from the Championship or teams relegates from the premier league. POGHISIO, Gideon and Kalonzo were all promising additions to the team. Gideon is not Match fit, Kalonzo’s work permit is still being held up by UHURU’s transfers manager, Murathe for unknown reasons,” he said in the analysis.

The President’s new recruits are also unable to gel as Raila, Kalonzo and Gideon are all fighting over the armband. He also claims that the different players recruited by the different have also come with specific players they want to join Jubilee FC.

Ahmednassir has also claimed that the new players have taken illegal substances (involved in KEMSA scam) and are on the radar of enforcement agencies like DCI and EACC.

13..Raila have taken banned substance made by KEMSA. It's also suspected that UHURU's team is in breach of the financial fair play rules. Murathe hasn't been candid on the source of the transfer fees for Raila, Kalonzo and Gideon.Lastly as a team from the City of Kiambu, UHURU's

According to Grandmulla, as Ahmednassir is popularly known, Deputy President has managed to form a formidable Champions League team after being released by the President one year ago. However, Ruto’s team was slapped with a two-year ban and cannot sign new players until at least July 2021.

Uhuru and Ruto’s team are likely to face off in the Champions League Finals in 2022. Both teams believe they have what it takes to win the big prize.