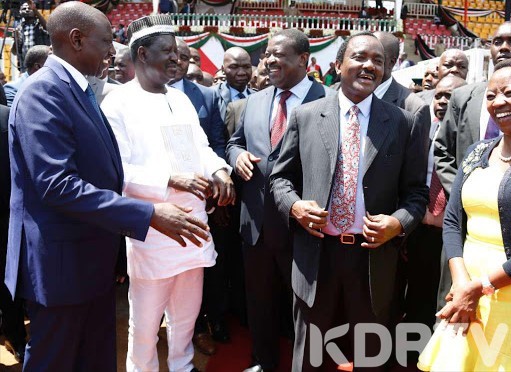 Ruto Raila and Musalia During a Past Function.

Raila, Ruto and Musalia have joined in on the battle of supremacy in the Western Kenya, using different tactics to woo voters ahead of the 2022 general elections.

The region has been initially known as ODM leader Raila Odinga’s stronghold, and he has managed to garnered thousands of votes from the region.

However, things have started taking a new twist with Luhya leaders uniting under one umbrella and trying to secure the region with a presidential candidate ahead of the coming general elections.

Musalia Mudavadi for instance who is ANC party leader has already expressed interest in the top seat and is very keen on vitalizing key support from the region.

READ ALSO: October, 1 Deadline Set For Burundian Refugees in Tanzania To Be Sent Back To their Soil.

Ideally, William Ruto has eyed the region over the past one year, making countless trips and participating in heart reach programs to woo the hearts of voters in the region.

The question of the day however is who is likely to take over the Western region?

“Western has its owners which is the National Super Alliance (NASA). The party is still active and the most dominant in the region, Ruto and his foot soldiers should keep away,” said Wycliffe Oparanya, Kakamega Governor.

Deputy President has used the scatter and rule tactic to gain popularity in the region.

For instance, he has stationed very vocal and loyal allies in different parts, who report to him every actions taking place in the region.

Majority of his foot soldiers are mainly leaders who failed in the past elections race or were foul played and denied a position in the current government.

The divide and rule tactic is thus aimed to give hope to the leaders who lost by promising them support and a chance in government again come 2022.

The NASA coalition consisted of Raila Odinga and Musalia Mudavadi among the core principles hence their popularity is still solid.

This therefore, leaves the fate of the two undecided as they might decide to collaborate or change their minds instantly.

However, their coalition is still evident in the region, with majority of current people in leadership pledging their full support.

In a recent meeting, Kakamega Governor Wycliffe Oparanya, the Senator Cleophas Malala and Godfrey Osotsi asked the Deputy President and his foot soldiers to keep off the region.

“We are aware of your plan to take over Western Kenya. It will not succeed as it has its owners. Tell your foot soldiers to keep off and forget votes from this region,” said Oparanya.

The 2022 presidential race is predicted to be a do or die battle.

According to them, it is payback time and they need the favor reciprocated.

Nonetheless, politics is a dirty game and things can change  instantly, it is obvious that the fate of Kenya’s next president lies in the hands of the region.