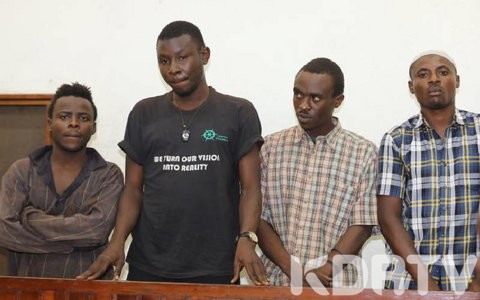 A Kenyan court on Friday sentenced four young men to six months in jail over trying to sneak to the U.S., hiding in a ship amid difficult living circumstances.

Mohamed Bwika, Fredrick Gitari, Mnyika Maganga and Stephen Malenya admitted they sneaked aboard a cargo ship, MV Ken Sea, on Aug.19, in an attempt to reach the U.S to look for jobs, the Standard Media reported.

The four young men told Senior Resident Magistrate Edgar Kagoni at the Mombasa-based court that life in Kenya “had become hard” due to lack of jobs, and they wanted to go to the U.S. seeking for job opportunities

Kagoni said: “The youth must be encouraged to love their country and they should not only dream of going to America, Although you seem to be innocent in your endeavors to look for greener pastures, which you think you can only find in America, it must be noted that you were risking your lives by hiding in the ship and that you also threatened the ship crew.”

The four were arrested on Aug.19 after they had climbed the ship through a mooring rope and tried to hide in the ship’s chain locker and engine room without getting permission of the captain

“I don’t encourage the conduct of such people around here who think they can hide in a ship and go wherever they want. So that others don’t do the same, they will go to jail for six months,” read Kagoni’s ruling.