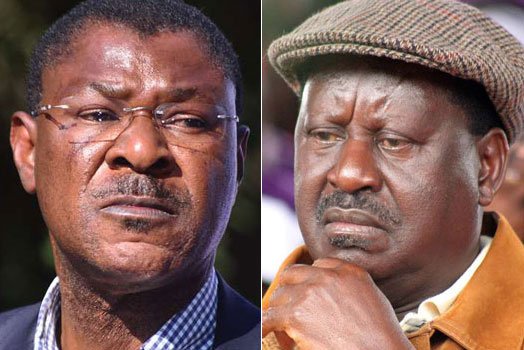 Bungoma Senator Moses Wetangula has revealed he will not be working with ODM leader Raila Odinga in the August 9 elections.

While speaking in Mukweya village in Kabuchai, the Ford Kenya party leader said that the former Prime Minister can’t be trusted.

“He betrayed me after I had stood with him for all those years. I can’t support him again,“

“Even if he sends as many people as he can to convince me, he can’t win my support again.”  The Bungoma Senator stated.

Their friendship deteriorated after Wetang’ula was removed as Senate minority leader and replaced by Siaya Senator James Orengo.

Raila and Defence Cabinet Secretary Eugene Wamalwa, according to the senator, were also behind the coup attempt to depose him as Ford Kenya party leader.

Their former coalition, the National Super Alliance was dissolved last year after the ODM leader allegedly abandoned Wetangula, Mudavadi, and Kalonzo after getting into a handshake agreement with President Uhuru Kenyatta.

The distribution of the coalition’s funds from the Political Parties Fund among the former affiliates was also another problem that contributed to the collapse of the NASA coalition.

Wetangula has so far formed the One Kenya Alliance coalition with Musalia Mudavadi, Kalonzo Musyoka, and Baringo senator Gideon Moi.