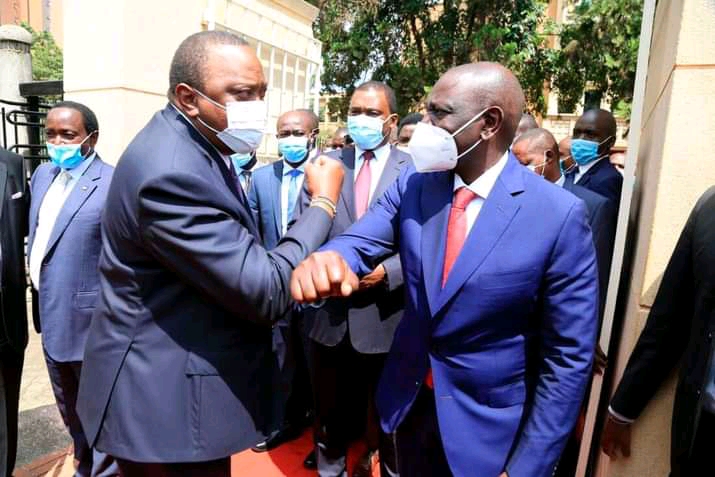 The bruising tackles between the head of state president Uhuru Kenyatta and his Deputy William Ruto has escalated after Uhuru hinted at bouncing back the collapsed Building Bridges Initiative (BBI) on Tuesday during the state of the nation address.

The ruling Jubilee party leader Uhuru Kenyatta admitted that the although the conceived baby (BBI) from the March 2018 handshake had been strangled to death by the High Court and Appellate Court, but there were still light at the end of tunnel giving hopes to the handshake soldiers who politically heartbroken by the death of constitutional amendment bill (2020).

Uhuru’s sentiments didn’t seat well with his deputy whose faction have been criticizing the amendment of the constitution citing that they are only hinged at creating positions and executive powers for some few individuals.

Speaking in Machakos on Wednesday, 1st, December, 2021 during the hustler nation two-day tour empowering hundreds of women, Bodaboda saccos and Jobless youths in the region, DP Ruto stressed that Kenyans should not be tasked with changing the constitution but they should largely prioritize to implement the structures that will put the ailing country’s economy at a better position.

“I told them Kenyans are not ready to change the Constitution for the sake of adding powers to the Presidency and creating more positions in the Executive. Changing the Constitution will have to wait until we improve on our economy,” DP Ruto said in Machakos.

In what was perceived as a direct attack to his boss, DP Ruto hinted that country has failed to breath hopes in the economy of the country and resort to direct all the resouces in changing sections of the bills in the constitution which can even be passed via parliamentary procedures rather than plunging the country into referendum.

“Even if we were confused at whatever level, what is the priority for this country? Is it creating positions for leaders or creating income opportunities for the ordinary people?” he added.

”BBI is illegal and unconstitutional,”Miguna says.