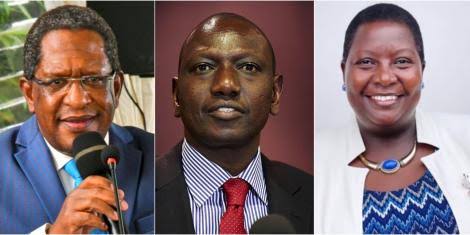 Dp Ruto vs Keriako
Environment CS Keriako Tobiko is at odds with Deputy President William Ruto once again, accusing the country’s second-in-command of exploiting familial relationships for his political benefit.
This comes after the CS’s sister, Kajiado East MP Peris Tobiko, claimed to have met DP Ruto on his behalf to apologize for prior remarks in which he referred to the DP as a “clerk.”
CS Tobiko, on the other hand, has subsequently stated that neither he nor any of his family members sent the Kajiado East MP to offer an apology for his statements, instead stating that he stands by his views.
“I have nothing to apologize about. I did not send anyone to Eldoret to apologize on my behalf. Neither has my family sent anyone to apologize. Ruto is, unfortunately, using family members to attack fellow family members. That is his modus operandi,” The CS told Citizen Tv.
According to the Environment CS, he has no reason to apologize to the DP, and that Ruto has now resorted to cheap politics by pitting family members against one another.
The CS also spoke on President Uhuru Kenyatta’s succession plans, claiming that the DP is unfit to govern the country.
“I stand by my opinion, as well as the sentiments expressed during the recent Maa proclamation, that Ruto is unfit to be President, and that if God forbid he is elected, he will mortgage our country.” the former DPP added
Subscribe to watch latests videos
In this article:Deputy President William Ruto