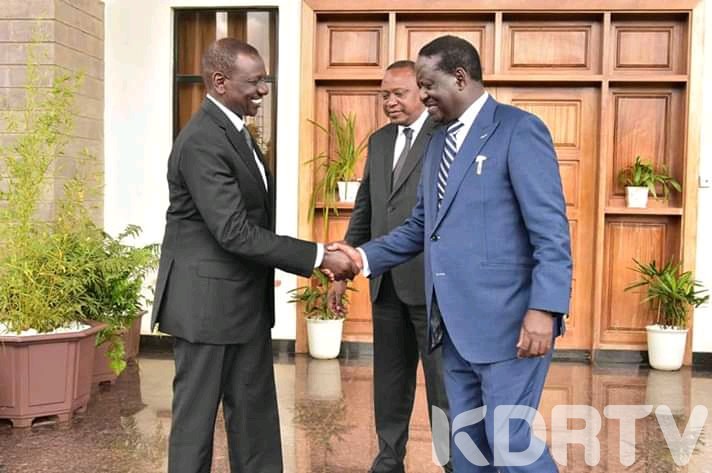 KDRTV-The ongoing supremacy battle between Deputy President William Ruto and former Prime Minister who is also the Orange Democratic Movement (ODM) party leader Raila Odinga has continued to intensify ahead of the upcoming 2022 presidential leaders where the two political figures are expected to test their political muscles in the presidential race.

Before their fall out shortly after the highly disputed 2007 general elections,Raila and Ruto had been closely working together and Raila believes that he is the one who introduced the self proclaimed hustler into the murky waters of politics and moulded him into the smart politician he is today.

Speaking during an interview on KTN,Raila dismissed the claims that he is fighting Ruto and made the claim that he is the mind responsible for Ruto’s political prowess.

“Why should I fight Ruto? In fact, it is me who recruited him to the change movement and helped him sharpen his political tactics,” said Raila as quoted by the Standard

Raila further rubbished Ruto’s heavy contributions to churches and termed it as hogwash.Raila has been leading his allies in criticizing Ruto’s contributions where he has been attending various church functions in the country and pumping millions of Shillings as part of his contributions and gifts.

“I want Ruto to be part of the struggle against corruption. Running around the country with bags of money in the name of building churches is hogwash,” Raila said.

Ruto heavily campaigned for Raila during the hotly contested 2007 presidential race where the majority of Kenyans up to now believe that Raila who was vying on the ODM party ticket won the race but PNU’s  Kwai Kibaki was sworn in as the president.

The election was later marred by chaos as the country immediately found itself in a post election violence where many lives were lost.

Since then, Raila and Ruto have been engaging in a tough political  war and 2022 is expected to be the climax of their showdowns as speculations are rife that the two will face off in what has already been described as do or die political contest.