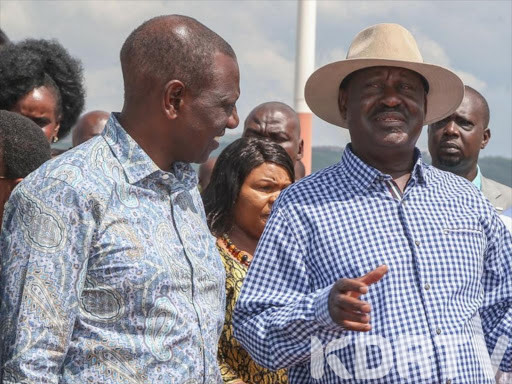 (KDRTV) – ODM leader Raila Odinga is on the receiving end of brutal attacks from Tanga Tanga over his controversial interview with Citizen TV in which he said, Deputy President William Ruto must step aside and be investigated over corruption.

The former Prime Minister said that Ruto cannot explain the source of the millions he has been dishing out to delegations who troop to his Sugoi home.

“Which individual can have such money? You are bringing crowds and crowds of people each and every day slaughtering chicken and paying for their transport and giving them petty cash, what is the source of such cash?” wondered Raila.

His sentiment have not gone down well in the Tanga Tanga camp. Kiharu MP Ndindi Nyoro, asked Raila if Ruto stays at their place; Kwani anakaa kwenu?

Nonsense! Kenya doesn't belong to a few monarchies. Kenya belongs to all of us. The haves and have nots. The high and the lowly. Dynasties and sons of nobodies. Mmetuzoea sana nyinyi – mnajijua. Ruto must go kwani anakaa kwenu? We are African and Africa is our Business.. pic.twitter.com/JJ3PccTVFU

Kikuyu MP Kimani Ichungwa asked Raila where he wants the DP to go. The Mp reminded Baba that it is only Kenyans who have the mandate to decide who goes where through the ballot and they have done that in two different elections.

Where does @RailaOdinga want @WilliamsRuto to go to and he’s saying this as who? It’s only KENYANS who can decide who to go where and they did that in 2013&2017 resoundingly.They will do it again.#NobodycanSTOPreggae. Anza kuzoea mzee wangu pic.twitter.com/tyMcwsUQe2

City lawyer Ahmednassir Abdulahi questioned how Raila could say such words yet he has been rejected by Kenyans in four different Presidential elections.

“BREATHTAKING from a man the Kenyan voter REFUSED to give him POPULAR MANDATE…everytime he sought it from them…1997, 2007, 2013,” reads Ahmednassir’s Tweet.

Another Tanga Tanga blogger claimed that it is the Odingas and the Kenyatta’s that have stolen billions of money since independence and they should go.

Kenyans are tired of Raila Odinga and his brother Uhuru Kenyatta. The Kenyatta's and Odinga's have looted Kenya for the last 50yrs sasa waende nyumbani kabisa. ION, If Raila was to contest against Daktari Ruto, he would be floored 8.30am ! pic.twitter.com/p7jwN3Lffp