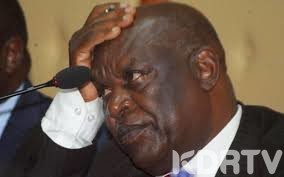 Members of the County Assembly of Nyamira have issued a notice of impeachment to the Governor John Nyagarama for failure to reinstate sacked pre-school teachers.

A letter was drafted by the MCAs and signed by the House Speaker which made a directive to the governor informing him that the vetting of the officers he had nominated  would not go on as planned and instead signatures will be collected to have him impeached.

The MCAs wanted the governor to reinstate the Early Childhood Development Education (ECDE) teachers after their contract was expired with no urgency to have them re-employed.

“The vetting of the nominated officers stands suspended until the ECDE teachers are reinstated to work. Failure to meet this will result to collection of signatures for impeachment as the issues will be unresolved,” read the letter by the House Speaker Moffat Teya.

Pre-school teachers at the Nyamira County had their contracts terminated after completing their terms and designated period.

This angered some of the members of the County Assembly together with the Teachers Unions in the region.

It is alleged that the impeachment was initiated earlier with the Governor being put on the spot for failure to necessitate the renewal and start of new contracts.

However, the Governor’s team claimed that they had not received communication regarding the same adding that due procedure had to be followed before new terms of the contract are reintroduced.

“We have no reason to hurry the process when we know there were serious irregularities during the hiring of the instructors. We will take our time and verify every person before they get hired,” said Governor Nyagarama.