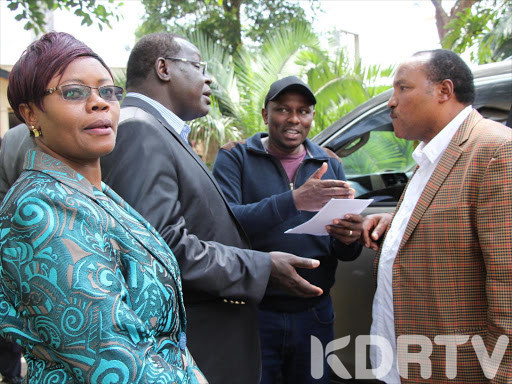 Kiambu acting Governor James Nyoro is under siege for withdrawing vehicles of officials deemed to be against his administration.

Roads and Public Works Executive Juliet Kimemia together with Finance and Planning Executive Kigo Njega had their official vehicles withdrawn by an order from the acting Governor, Nyoro citing that they were into politics rather than deliver through their working positions.

Following the incident, the members of the executive were divided on the matter with the ones paying allegiance to Governor Waititu sulking and refusing to cooperate with Nyoro.

Karungo Wa Thangwa the Sports and Youth Affairs CEC pledged his support to the two CECs whose vehicles were withdrawn by offering his vehicle to them.

“I have offered to share my vehicle with my colleagues since theirs were withdrawn under unclear circumstances. We are very much determined to serve our people and deliver as it is our mandate,” said Thangwa via twitter.

Nyoro’s ascending into power came about after Governor Ferdinand Waititu was charged with graft charges, and accused of embezzling Sh588m.

He was arraigned in court and  charged, with the matter awaiting hearing. However, he was barred from accessing his office until investigation are complete, handing the official matters of the county to his deputy.

Some leaders have termed the move a political strategy aimed to finish Waititu political career, while others who pledged support to his deputy applauded the move by the DPP to have him held culpable.

The acting governor Nyoro on the other hand has not had a smooth sailing, with a few of the executives being defiant to his orders and belittling his powers.

During his first month as acting Governor, Nyoro reshuffled some of the CECs and transferred them to different dockets. The CECs did not heed his orders and rather challenged it.

“You are not constitutionally eligible to appoint, assign, or reshuffle county executives. That is the power of the governor,” said the CECs.

With Waititu’s fate still a mystery, Nyoro is determined to hold on to the seat anD re-position for 2022 politics where he intends to be the county boss.

Currently the Kiambu County is under siege as the  wrangles have trickled down to the residents who have picked sides and are hurling insults to each other through social media and WhatsApp groups.