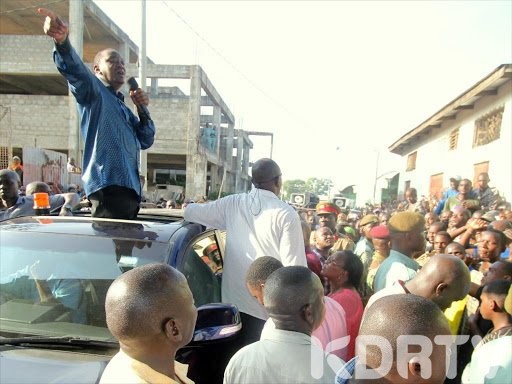 President Uhuru Kenyatta has earlier today sent a message to the Kenyan men, urging them to be respectful while wooing women into their trap.

The president said that women need to be respected and treated in a modest manner, rather than being forced by men into having their way.

He made the sentiments today while commissioning the Nairobi expressway on Wednesday near Cabanas on Mombasa Road.

READ ALSO: Broken Office Equipment, Kicks, Blows And Teargas As Elachi’s Opponents Storm Her Office To Throw Her Out

Which translates to “Men respect women, don’t go disrespecting them. Go and seduce them slowly, if you succeed, well and good, if not look for another one.”

The sentiments were allegedly made in reference to the drama that unfolded at City Hall, during the return of County Speaker Beatrice Elachi.

Elachi was reinstated as the County Speaker after a dramatic ousting, something that did not go well with majority of MCAs that wanted her gone completely.

Majority leader Abdi Guyo was accused of frustrating her and paying goons to cause fracas and chaos during her return.

Elachi was however very stern and held her ground, a move that intimidated Guyo who was all over the media crying that his life was in danger.

While making the stop over, Uhuru echoed on the BBI bashing critics who were propagating that he was interested in a position after completing his second term.

Uhuru said that he was not interested in any post as he was tired, adding that the BBI was formulated together with Raila Odinga to have rule out the culture of shedding blood in politics during every election year.

Uhuru has termed the people spreading the propaganda about BBI as hypocrites who are interested in swaying people’s minds for their own political benefits.

He has pledged to come back with the BBI, asking residents to support it and enhance national cohesion aimed to steer economic growth and development.