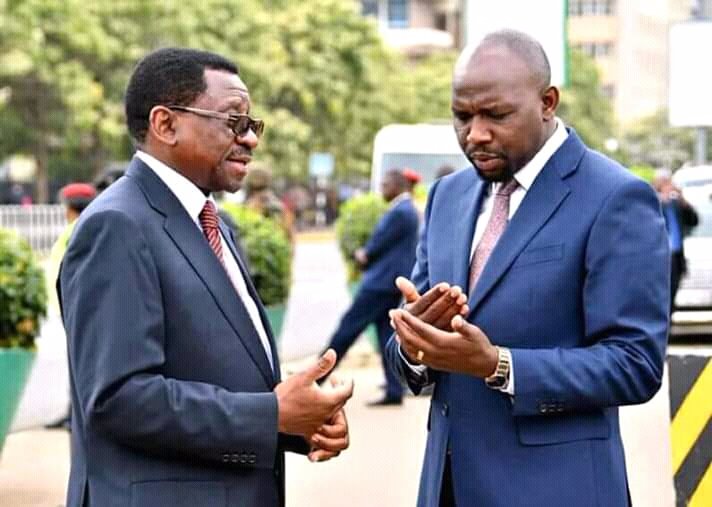 On Tuesday, Lusaka controversially ended the Senate sittings at a time when it looked like the ‘Team Kenya’ lawmakers would carry the day. He convened a special sitting to discuss other amendments to the revenue bill on Thursday. This was later postponed to Monday.

Team Kenya Senators led by  Kipchumba Murkomen (Elgeyo Marakwet) and Johnson Sakaja (Nairobi) have accused Lusaka of meeting their colleagues in the other team to plot how to ajourn Monday’s motion.

Murkomen claimed that Lusaka and Minority leader James Orengo have been meeting Senators in City Hotel to discuss how the motion will be adjourned for a record 9th time. Orengo will be the one moving the motion.

“Speaker Lusaka has convened a special sitting on Monday but he is busy doing rounds in city hotels lobbying Senators to support an adjournment motion to be moved by Sen.Orengo in the same sitting,” Murkomen lamented on Social media.

Speaker Lusaka has convened a special sitting on Monday but he is busy doing rounds in city hotels lobbying Senators to support an adjournment motion to be moved by Sen.Orengo in the same sitting. We have sunk this low ? @SakajaJohnson @Aaroncheruiyot @SenMutula @ledamalekina

As the speaker, Lusaka is supposed to be neutral. He is the referee. But Sakaja claims, the referee is training with the other team ahead of Monday’s showdown.

Dear Referee. Stop training with one team. Let’s all meet at the pitch. ??

Team Kenya have successfully led to the amendment of the Bill to ensure counties are not adversely affected in the sharing of funds. The amendment from Senator Mithika Linturi (Meru) will ensure that counties share Ksh270B based on previous parameters, while any amount above that is shared using the new formula.

Senate Majority Whip Irungu Kang’ata wants revenue shared based on population. He is supported by lawmakers from populous counties. Kang’ata also claims that this is the official government position.