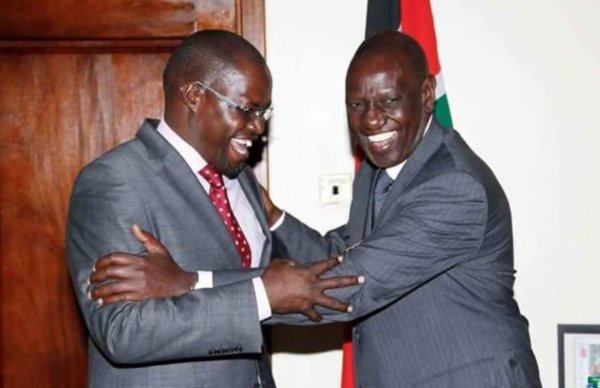 (KDRTV) – The former Prime Minister and ODM leader Raila Odinga was Wilson Sossion’s guest in Bomet on Saturday. He was the chief guest in the function where Sossion’s daughter Rosemary was celebrating being the first practicing lawyer in Motigo Village within Bomet County. The event turned out to be a political rally of some sort.

The outspoken Emurua Dikirr Constituency Member of Parliament Johana Ng’eno was in attendance. The politician is strongly associated with the Deputy President’s Tangatanga group. Most of the people that attended the event could not believe their eyes.

It turns out Hon. Ng’eno attended the function with two main objectives. Firstly, he wanted to confirm his immense support for William Ruto to Raila and KANU’s Nick Salat who were in attendance. When he was given the microphone to address the public, here is what he had to say;

“The Building Bridges Initiative (BBI) must aim at uniting all Kenyans from all tribes. If you Raila come together with Uhuru Kenyatta, Ruto must also be included so that our country moves forward.”

READ ALSO: Why Raila Odinga Was Forced To Cut Short His Speech Immediately After Taking The Podium In Bomet

The Member of Parliament was elected to parliament on a KANU ticket. But his second objective was to tell off his party leadership that has been threatening him. He openly criticized and dared the KANU Secretary-General Nick Salat to expel him and call for a by-election in Emurua Dikirr Constituency. He said that he was very ready for that.

“I heard you have been spitting fire about me. I’m told you want to expel me from the party and call for a by-election in my constituency. I beg you not to try that because you will only embarrass your party together with your party leader, Gideon Moi. KANU will lose terribly, ” asserted the confident MP.

He also vowed that he will neither apologize to President Uhuru Kenyatta nor his mother Mama Ngina. The guy was saying that amid cheers from a small section of the people that were in attendance.