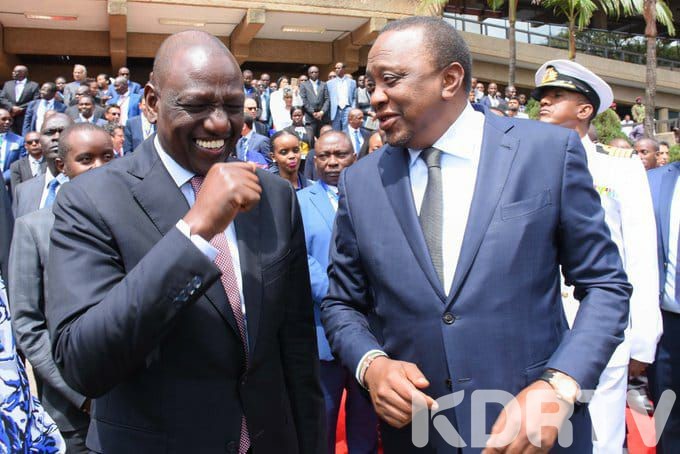 Deputy President William Ruto has celebrated President Uhuru Kenyatta as an inspiration many Kenyans including himself.

President Kenyatta turned 58 on Saturday and the DP reminded him that he has been the youngest President Kenya has ever had. He told him to remember the things they had planned on doing when they retire.

“Happy birthday to my friend & Boss H.E. Uhuru Kenyatta. You are a great inspiration to me, Jubilee leadership and millions of Kenyans as the youngest President we’ve ever had,” reads a post on Ruto’s Official Twitter handle.

Happy birthday to my friend & Boss H.E. Uhuru Kenyatta. You are a great inspiration to me, Jubilee leadership and millions of Kenyans as the youngest President we've ever had. As we age, I look forward to what we agreed on to do when we retire. Remember? Ubarikiwe mpaka Ushangae!

Ruto joined thousands of Kenyans who flooded social media with goodwill messages for the president as he turns 58 years.

KTN Journalist Toni Gachoka asked the President to crack the whip on Ruto and his cronies who have disrespected him and dented his legacy with corruption.

Uhuru @StateHouseKenya as you Mark this day, reflect on your legacy which is heavily dented by corruption in your ranks. DP Ruto his cronies have mocked you, MPs have mocked you, the public has mocked you, in this fight make a difference & pay any price #HappyBirthdayMrPresident pic.twitter.com/UFIu8iE2sj

President Uhuru’s birthdays have been a low key event apart from 2017 when it coincided with the repeat Presidential elections. The Jubilee campaign team created posters asking Kenyans to vote early and then go for Uhuru’s birthday party.

Some Kenyans still regret this decision up to now.

It is not clear what the two agreed to do when they retire but we know they won’t retire at the same time. Whereas President Kenyatta has maintained that he will go home in 2022, his deputy is the bookmakers’ favourite to be the next President.

There have been calls for Uhuru not to retire in 2022 because he is too young to exit the political scene. COTU Secretary General Francis Atwoli and Nairobi Governor Mike Sonko have publicly made these calls.

On Wednesday, during an interview on Citizen TV, Atwoli said that Uhuru can vie for presidency in 2022 if the BBI report is implemented.

“In 1992, after we changed the constitution, Moi ruled for 10 more years. After the BBI, Kenyatta can say that he wants to be president as it will be a new outfit and new constitutional terms,” Atwoli said.

Blow for Raila as Anne Waiguru Jumps off BBI Train

(KDRTV) – The Independent Electoral and Boundaries Commission (IEBC) is mourning one of its officers who was found murdered in Baringo County on Wednesday....

(KDRTV) – A story is told of a pre-election pact between Raila Odinga and Kalonzo Musyoka in the run-up to 2017 elections. The two...