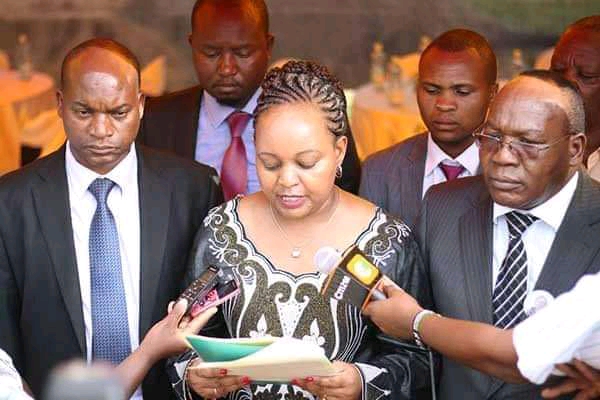 According to Ngirici, Waiguru’s entry into hustler nation faction was pushed by the fact that being a doppelganger (Waiguru), she had to follow the trail of her bigwig opponent (Wangui) in the attempt of pulling a counter attack situation.

Speaking to a local publication, Wangui alleged that Waiguru’s political lifespan in Deputy President William Ruto’s United Democratic Alliance (UDA) might not last up to next year owing to the fact that if Wangui resolves to quit UDA, then Waiguru might also be forced to play her cards safe by decamping from hustler nation to follow Wangui’s new home.

“I popularized UDA party in Kirinyaga and convinced my people to join the party and support Ruto’s presidential bid and it happened. I also led them in opposing the Building Bridges Initiative (BBI) and they agreed with me,” Wangui alleged while speaking Standard journalist.

She revealed that her decision to go slow on hustler nation camp was highly hinged on the entry of Waiguru into Tangatanga camp. She said that she will announce her next step after engaging various stakeholders and her supporters on the ground. While the meaning of her name, Wangui liked herself to a choirmaster who candidly face the people and tells them what is good for the society.

“I’m not like those people who listen to the ground for euphoria. My name Wangui denotes a lead choirmaster, and as a leader, I have a responsibility to candidly face my people and tell them what is good for them,” Wangui Ngirici added.

However, this emerges four days when the second in command DP Ruto is expected to tour Kirinyaga County on Sunday to sell hustler nation agenda to the ground people.