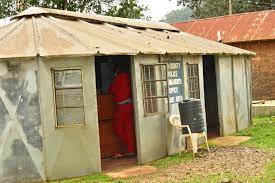 A window in Mau, Meru County is currently nursing serious injuries after being attacked by family members following a land dispute.

According to report, the 60-year-old woman was beaten by her kids and family members after trying to sell a family land to three men.

The lady was allegedly planning to sell the land to continue making merry with her new boyfriend.

Neighbors who broke the news to Radio Jambo claim that the woman, who has turned to an alcoholic, has been wasting money on alcohol escapdes.

They further revealed that her late husband used to treat her like a queen and would go for fancy trips all over the country a reason why she was still trying to maintain the expensive lifestyle.

She had disappeared for almost three months only for her to reappear on a random day in the company of the three men who were potential buyers of the land.

The widow claimed that it was her land and she could do whatever she wanted with it since she inherited it from her late husband.

Her kids, however, were not having it and descended on her with kicks and blows.

Confirming the incident, the area chief Mutembei, said the victim was rescued by locals and rushed to Tigania hospital where she was admitted.

“She sustained head and body injuries but she is responding well to treatment, can be released from the facility anytime,” he said.