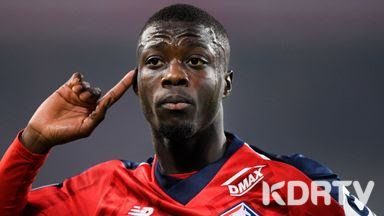 Nicolas Pepe is set to join Arsenal after landing in London  for medicals.

The Ivorian had a good season with French  Ligue one side Lille scoring  a total of 22 goals and assisting 13 others will join the Gunners who have so far landed Gabriel Martinelli, Dani Ceballos, and William Saliba.

“Arsenal are on course to confirm the €80m club-record signing of Ivory Coast international Nicolas Pepe from Lille later this week. The 24-year-old winger/forward has arrived in London & will undergo a medical today before signing a five-year contract at the Emirates” posted on Twitter by journalist David Orstein .

Pepe will become club-record signing by the North London based side.