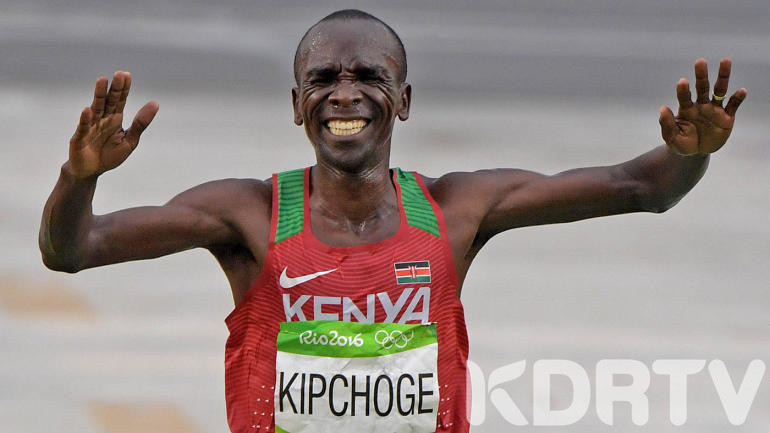 Eliud Kipchoge, world marathon record holder on Friday threatened to sue NRG Radio over the use of his brand for marketing without his consent.

According to Kipchoge, the local radio was capitalizing on his brand and using it as a marketing strategy to advance their followers and get more people to listen to their show.

Through flamboyant city lawyer Donald Kipkorir, the radio station was given a 2 hour ultimatum to pull down all posts that bore the images and name of Kipchoge within failure of which they would suffer the consequences.

Kipkorir was retained as Kipchoge lawyer after he broke the world record on Saturday for running 42 kilometers under two hours.

The details of the demand later explained that the radio station was to issue an apology for using his name, image and brand without consent, pull down all social media posts that detailed his brand and finally a written response indicating that the station had complied to the same.

“Our instructions are to demand that you immediately,Expunge his name, images and references whatsoever in all your platforms, unqualified apology for violation of his rights, and misuse of name, images and reputation and finally a written response to indicate you have complied with the same,” read the demand letter.

This follows the events on Wednesday where the local radio station together with  the help of comedian Erick Omondi narrated their strategy to pledge support to Kipchoge through soliciting fans and increasing the social media followers for the radio station on Instagram.

They promised to gift Eliud Kipchoge with a vehicle if there social media following reached at 1 million people. The wave was viewed with mixed reactions from people, with majority slamming the radio station for using Kipchoge’s brand to market and increase their fan base.

Kipchoge via his lawyer rejected the offered gift, with a directive to have all his demands met.

Barely after two hours, the radio station had corresponded to the directive and deleted the images on their social media that detailed the Kipchoge’s brand.