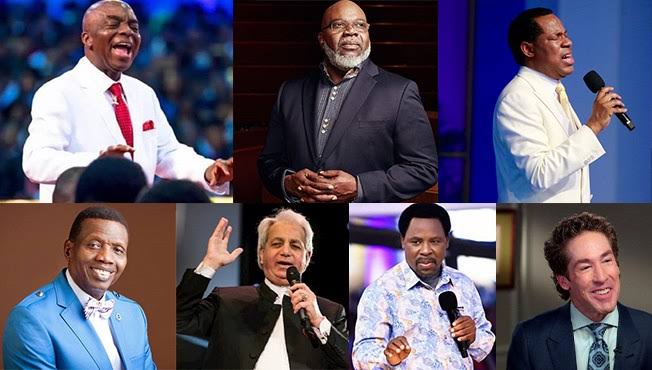 He is a South African pastor. He has an estimated net worth of around $1 billion dollars. This makes him the richest pastor today.

He is an American,televangelist and author associated he founded in 1967, Eagle Mountain International Church Inc. (EMIC). His net worth is $760 Million.

According to Forbes, Bishop Oyedepo is the wealthiest preacher in the world with a net worth of over US$150 million. The church owns four private jets and several buildings, including in London and the US.

Also known as Major 1 is a Malawian fugitive, Christian preacher, self proclaimed prophet, businessman, motivational speaker, and author. He has a net worth of $148 Million

Commonly known as Papa Ayo Oritsejafor, is the establishing and Senior Pastor of the Word of Life Bible Church, situated in Warri, Nigeria. We believe he has a net worth of $111 million.

He has made his money through his various business interests, including broadcasting. He has also made money from the sales of his various publications. He has a net worth of $101.5 million

Enoch Adejare Adeboye is a Nigerian pastor, General Overseer of Redeemed Christian Church of God in Lagos. He has a net worth of $69.3 million

Benny Hinn is an Israeli-born televangelist who has a net worth of $63 million. He is best known for his regular miracle healing crusades that are usually held in large stadiums in major cities and broadcasted on national TV.

In 2011, Forbes estimated Oyakhilome’s personal wealth as between $30 million and $50 million. We believe he has a net worth of $50.7 million now

He earns by being a celebrity pastor who preaches a sermon in various churches and his own Lakewood Church.His net worth is $42 Million