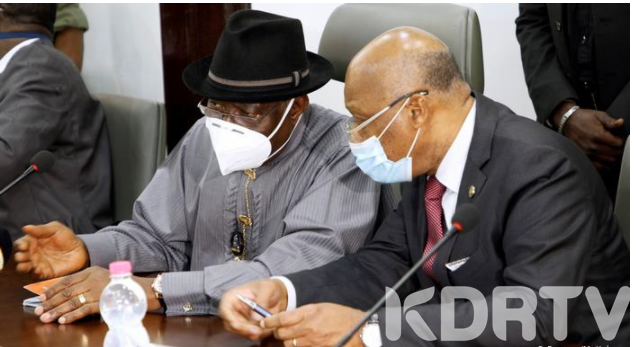 ECOWAS delegation arrives Mali to deliberate on the coup

(KDRTV)-A delegation from prominent West African Leaders who went to Mali to initiate the process of facilitating civilian rule announced that it was “hopeful” after holding talks with the military leaders that seized  President Ibrahim Boubacar Keita.

After meeting with Colonel Assimi Goita who is the army chief, Mr. Goodluck said “we’ve seen him, he’s all right.”

According to a statement by the ECOWAS commissioner Jean-Claude Kassi Brou, the talk happened in a transparent environment and said that they are looking forward to finalizing everything by Monday.

On the other hand, the spokesperson to the current army which branded themselves as the National People`s Liberation Committee announced that the deliberations were proceeding quite well

“We understand that presidents like Alassanne Ouattara of Ivory Coast are making efforts to reduce tensions for a peaceful solution even though they have condemned our seizure of power. We welcome talks,” he said

The ECOWAS delegation also toured the Central army camp, outside the capital Bamako where the mutiny commenced

Earlier on, the African Union (AU), the UN and other international bodies had condemned the rebellious soldiers pressurizing that President Keita to be reinstated

However, the people of Mali took to the capital Bamako to hail the rebellious soldiers for rescuing their country

“We are here today to show that we do not agree with this coup but people attacked us with stones and then the police dispersed our supporters,” said Abdoul Niang, an activist who supports President Keita.

Giant countries such as the US also condemned the coup in Mali and suspended military aid to the country.

KDRTV has established that ECOWAS will now meet ambassadors of five countries who have permanent membership in the UN Security Council (the US, China, Russia, France, and Britain) to discuss the fate of Mali.