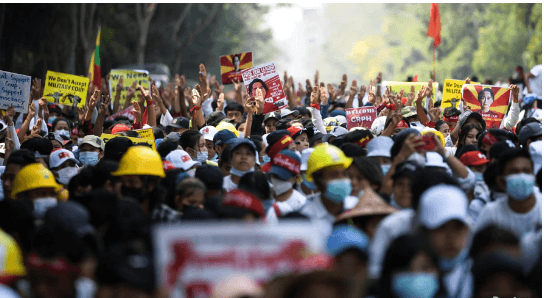 The protesters have resumed despite the deadly response from the military that led to the deaths of two protestors.

The deaths occurred after the military used live bullets, water cannons, slingshots, and teargas on protestors.

A group called Gen Z which organized for Civil Disobedience Movement issued a call on Sunday calling for a general strike.

However, through a state ownedMRTV, the coup leaders warned protestors against “inciting the people, especially emotional teenagers and youths to a confrontation path where they will suffer the loss of life”

However, we received reports that the military has set roadblocks near foreign embassies where the Burmese have been using as gathering places who have been also calling for foreign intervention.

The toat number of a protestor who have been killed so far is three.

Many people are also in hospitals after sustaining serious injuries, while hundreds have been detained.

There are also rumours that the internet shut down is looming the country from Monday, this was according to the US embassy in Burma.

Reports received that internet and mobile data may not be available from 1:00 am to 12:00 pm tomorrow in Yangon.

The coup leaders in Myanmar have defied international calls to stop using excessive force against protestors and that they should release the detained political leaders.

International communities have imposed various sanctions on the coup leaders and the EU announces that it is considering further actions.

The military seized on February 2, 2021, after alleging that the previous elections were fraudulent and thus declared a one-year-long state of emergency.

However, the election agency in the country refuted claims of fraudulent elections.