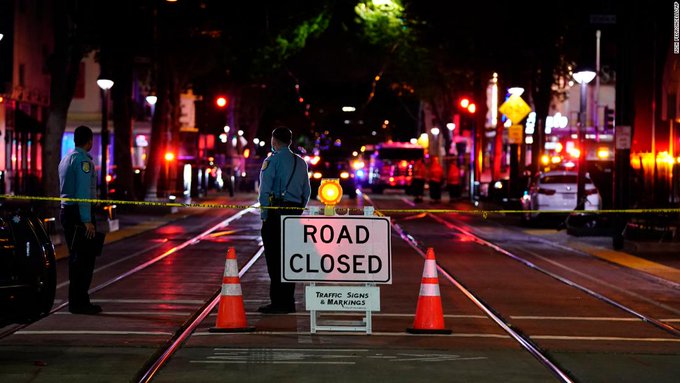 KDRTV has confirmed that at least six people have been fatally shot while dozens were injured in the center of Sacramento.

According to the police report, about 10 were injured during the shootings

Reports indicated that the nearby police responded to the gunfire and came across a “very large crowd.”

No suspect in the shooting has been taken into custody by the police.

“This is a tragic situation,” Chief Lester said.

According to the police, the investigators are already on the scene and have urged the civilians to forward any forward that would help.

The shooting transpired at 02:15 (09:00 GMT) near the junction of 10th Street and K Street, leading to the Golden Once Center, where the Sacramento Kings play basketball.

Pamela Harris reported that her daughter called her at 02:15, saying that her 38-year-old son, Sergio, had been fatally shot outside a nightclub

The incident pricks fresh wounds in the ongoing debate about gun violence in the United States.

Our correspondent in the United States reports that he visited the scene and could see lifeless bodies of people lying in the streets.

Footage from #Sacramento, #California, where six people were killed in a shooting and at least 15 others were injured.
According to👮‍♀️ , the incident occurred at night in an area where bars and restaurants are located. The cause of the incident is not known. #USA #letsgobrandon pic.twitter.com/u51iTVCvm4

The police have confirmed that six people have lost their lives and are now asking the public members to help with the information that would help identify the culprits.

BREAKING: Police are seeking public help in identifying suspects in fatal Sacramento shooting that killed six people: "We now have confirmed that we had six people killed… an additional 10 people were transported or self-transported to area hospitals." https://t.co/VluksVWZTC pic.twitter.com/GtpPUzCbP4