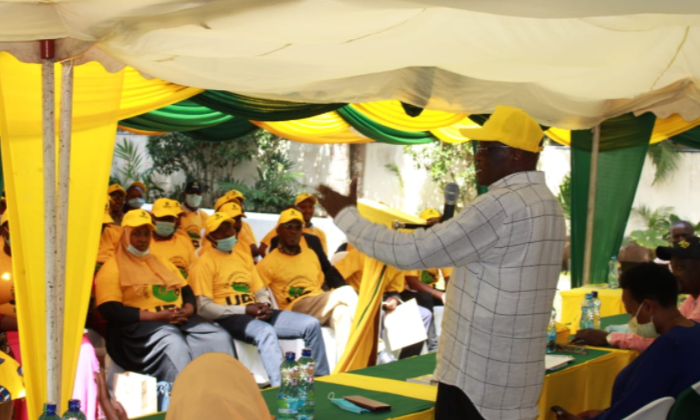 The meeting which was being held at the Terrace Villa Resort had approximately 100 representatives from six coastal counties.

Police described the meeting as an illegal assembly hence the disruption as the leaders were forced to flee the scene.

Prior to the meeting, entry of the venue was very controlled and limited to invites only so as to ensure only members were let in.

“Dear UDA Aspirant, this is to inform you that the scheduled meeting on Thursday 3rd June 2021 for Coastal region will take place at Terrace Villa Resort, Neem Avenue, off Greenwood Drive-Nyali, Mombasa County. Registration starts at 7am. Only those who have fully paid will be admitted.” The invitation read.

Ali Mazurui, who is eyeing the Jomvu Ward UDA ticket in 2022, cried foul over the police actions as he accused authorities of sabotage in a meeting meant to discuss strategies that would ensure more popularity of the party within the coast region.

“We had complied with all protocols set by Ministry of Health to avert the spread of Covid-19, we had informed the police but just before the first session was over, police forced themselves into the villa and ordered all of us to leave, Mazurui lamented.

Muthama reportedly left the meeting without telling party members of an impending raid as he acted on a tip-off.

Officers led by Nyali sub-county police commander Daniel Masaba soon walked into the meeting and asked the confused crowd to vacate the premises.