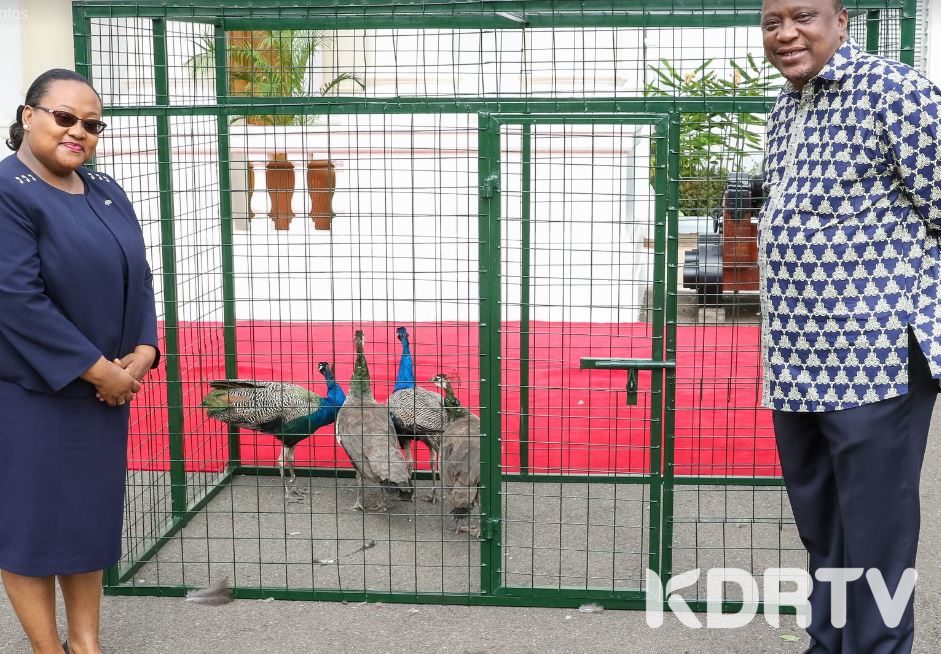 President Uhuru made a private visit to Tanzania last month in an attempt to solidify the rocky relationship between the two countries through trade and building bridges.

Well, the trip has finally paid off as Tanzania’s President John Maguli sent four peacocks as a sign of  good gesture with a warm message accompanying it.

The package containing the fancy birds were delivered on Friday morning by Tanzania’s High Commissioner Dr. Pindi Hazara who also bore the good will message from the President Magufuli.

Speaking while acknowledging the gifts and the good gesture, President Uhuru announced that the birds were a symbol of unity, peace and brotherliness that was being emphasized by the two leaders. He said,

“On behalf of Kenya and I, I receive this special gift in the spirit of brotherhood and friendship aimed to strengthen east Africa residents”.

This comes weeks after the existence of  brutal tension between the two countries.

Initially, the enmity was based on music and art which later shifted to business.

Early in the year President Uhuru had declared free movement across the Kenyan borders for all east Africans, and they were allowed to trade, live and build homes in Kenya.

The matter escalated when Starehe MP Charles Njagua made careless xenophobic remarks that led to his arrest and detention for close to a week.

The war was further drone to social media where insults and comparisons of different types were hauled left, right and center.

The final nail on the coffin was during the AFCON games where Tanzania was up against Kenya.

Although the match ended with Kenya ahead of Tanzania, it was evident that it was more than a football tournament.

The president’s visit although private, aimed to strengthen ties and rebuild the long term relationship that had existed over the years.

President Magufuli’s gesture might have put the war to rest, by solidifying the relationship with the ornamental birds.