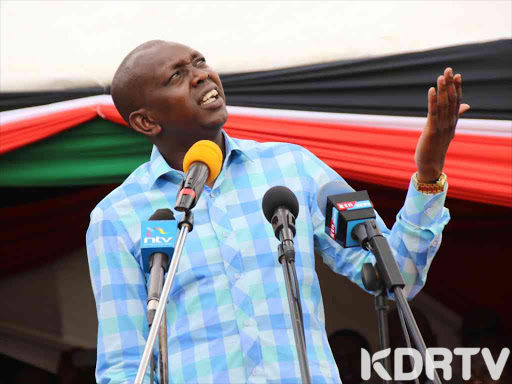 KDRTV-Controversial Kapseret member of parliament Oscar Sudi has found himself in trouble after he allegedly tried to grab  a 30-acre piece of land belonging to one family near Moi University main campus in Uasin Gishu County.

The children of the late colonial area paramount chief and popular farmer Kibor Talai had erected signposts indicating that their land was not for sale before Sudi arrived last Saturday accompanied by a group of rowdy youth and pulled down the posters  after the efforts of the family to stop them proved futile.

“On Friday last week, we spotted some people surveying the land. When my brother and I asked them what they were doing there, they said they were sent by Mheshimiwa Sudi. However, we told them that the Talai land was not for sale. The following day, Sudi came with more than 20 people and tried to pull down these signposts,” one of the chief’s daughters told the Daily Nation.

Mr Talai died in 2012 and the family moved to the court to settle down a succession dispute concerning sharing of the Talai 1600-acre land.

On his part, Sudi through his lawyer claims that he had signed an agreement with Talai’s daughter-in-law who is now a widow to lease the land  and settle the family’s debts and also cater for children’s school fees. Sudi himself was however unreachable for any comment.

The case has attracted more public attention due to the popularity of the Talai’s family in the Kesses constituency and the entire Uasin Gishu County.It is the same family which gave out the land for the construction of Moi University during the late former president Daniel Moi’s regime.

Sudi grew up in the same land when his father was a casual laborer in the Talai’s family.He claims that he was a charcoal seller within Moi University before he turned to be a tout in the Eldoret-Moi University road before his breakthrough and entry into Kenya’s political scene.