The handshake report has been completed by the Building Bridges Initiative (BBI) taskforce, after collective views were analyzed across the country.

According to the meeting held on Wednesday October, 23, the taskforce finalized on the report and the only thing that awaits is the submission to President Uhuru Kenyatta.

“The joint Secretaries have officially communicated to the office of the President that the Building Bridges Initiative report is ready for handing over to the President,” part of joint taskforce statement signed by BBI joint secretaries Paul Mwangi and Martin Kimani read. 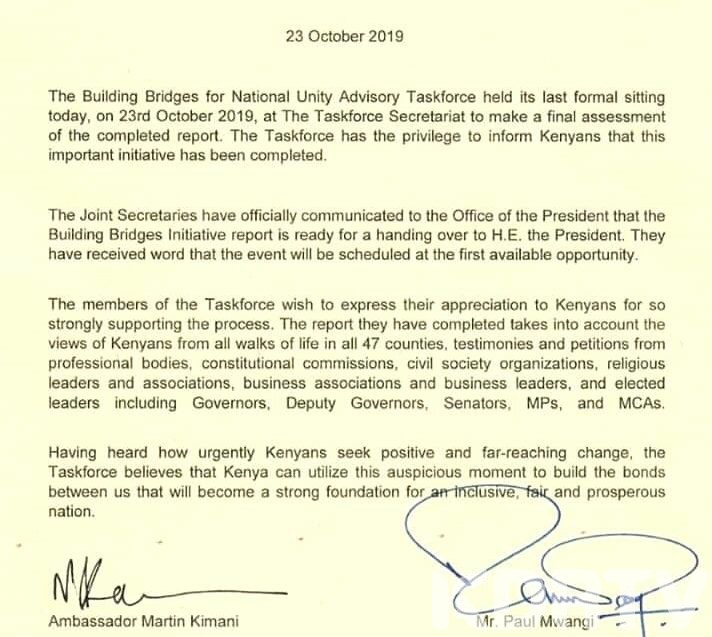 READ ALSO: We Will Campaign For The BBI Across The Country With My Brother Raila, Uhuru Declares

In the report, the joint teams explained that the views of Kenyans from all the 47 counties were included,  encumbered with testimonials and professional bodies.

Ideally, the team explained that there was a directive order for the report to be presented at the first available opportunity making it a priority.

This follows the famous handshake and extension of unity between ODM leader Raila Odinga and President Uhuru Kenyatta after an intense election year.

The taskforce was formulated on March, 9 2018 in a bid to have an inclusive government adn stop blod shed during elections.

"The joint Secretaries have officially communicated to the office of the President that the Building Bridges Initiative report is ready for handing over to the President." https://t.co/qr24lcVWWb

The BBI has received mixed reactions even before its introduction, with some leaders brushing it off claiming it is a plan to benefit a few people in Government.

DP Ruto for instance, has been very vocal about the BBI and the famous handshake, terming it a plot to frustrate his 2022 top seat agenda.

However, last weekend he was caught on video changing his views and stating that he was ready and willing to support it on conditions that the details were made public and approved to benefit Kenyans.

“I want to ask all of us to refuse to be drawn into the politics of ethnicity, hatred, division and political deceit and stand firm behind President Uhuru Kenyatta so that we can unify this country and concentrate on the transformation of Kenya,” said Ruto.

Subscribe to watch latests videos
In this article:BBI Report,The Handshake